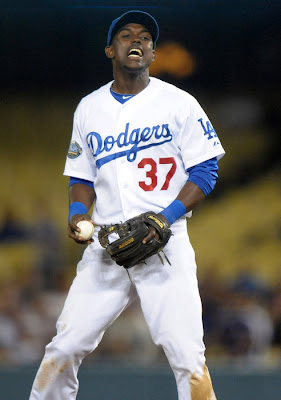 The Los Angeles Dodgers today placed infielder/outfielder Jerry Hairston Jr. on the 15-day disabled list (retroactive to May 6) with a left groin strain and recalled infielder/outfielder Elian Herrera from Triple-A Albuquerque. Herrera was batting .250 with four doubles, two homers and 16 RBI in 27 games with the Isotopes, but has hit safely in seven of his last eight games (.306, 2 HR, 5 RBI). The 28-year-old batted .251 with a home run and 17 RBI in 67 games with the Dodgers last season, while appearing in games at second base (13 G), third base (20 G), shortstop (2 G), left field (22 G), center field (9 G) and right field (7 G) in his first Major League experience.

Hairston was batting .255 with a home run and five RBI in 20 games this year in his second season with the Dodgers.
Posted by Roberto Baly at 3:35 PM