Dodgers and Metrolink: The Rail Series May 27 and 28 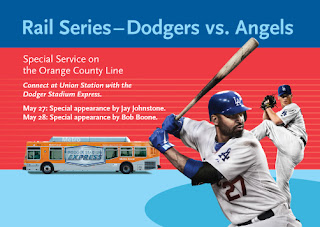 I posted this yesterday but the Dodgers have send out more info.

The Dodgers and Metrolink have partnered on the Rail Series which will provide special round-trip service between Oceanside and Los Angeles (Union Station) on May 27 and 28 for fans traveling to Dodger Stadium for the two-game series, Monday at 5:10 p.m. and Tuesday at 7:10 p.m., against the Angels.

The Rail Series service will be highlighted with Metrolink station events, including an appearance in Fullerton on Monday by Dodger Hall of Famer Tommy Lasorda who is scheduled to be at the station beginning at 2 p.m. and will ride the train from Fullerton to Union Station. The day’s festivities will begin at 1:30 p.m. with an appearance by Dodger alumni Jay Johnstone and Kenny Landreaux at the Fullerton and Irvine Metrolink stations respectively. Johnstone will also board the train heading to Los Angeles.
On Tuesday, Orange County Line train 609 will bring fans from Oceanside to Union Station, while a special train will be offered for passengers to their return destination. The station events will include Dodger attractions including a pitching inflatable, photo opportunities and autograph signings. Both days, all Little League and other youth baseball players who are dressed in their team uniforms can ride free with a fare paying adult.

Metrolink tickets will be available the day of the event at Orange County Line stations. Adult round-trip tickets are just $7, while senior/disabled and youth (ages 6-18) tickets are just $6 and $4, respectively. Children ages 5 years and under ride free with a paying adult. Tickets can be purchased on the day of the game only, while no advanced ticket sales are available from the Metrolink ticket vending machines (TVM). The May 27 Rail Series special train is the only Metrolink service offered on Memorial Day, with the exception of a pair of round-trip Antelope Valley Line trains. Ticket information can be found by visiting www.metrolinktrains.com/railseries.

Metrolink is partnering with the Dodgers, Angels, the Mobile Source Air Pollution Reduction Review Committee (MSRC), Metro, the Orange County Transportation Authority (OCTA) and the City of Fullerton to provide transportation to the Rail Series.

The special Metrolink train service will complement the Dodger Stadium Express buses operated by Metro from L.A. Union Station to Dodger Stadium and back.

For the fourth consecutive year, LA Metro is offering the Dodger Stadium Express bus service. Dodger game day tickets are honored as payment to ride the bus service and the shuttle operates 90 minutes before the game and 45 minutes after the game. Fans are encouraged to use the many transportation alternatives that serve Union Station and that will connect them to the new Dodger Stadium Express. For specific route and schedule information, fans can visit www.metro.net or call 323.GO.METRO.

Tickets for the series against Anaheim can be purchased by visiting www.dodgers.com/tickets or by calling 866-DODGERS.