What's going on at Dodger Stadium for three game series against the Colorado Rockies? 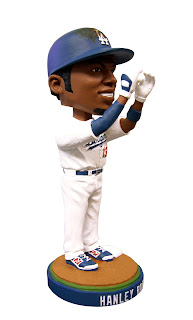 Due to the attendance expected, auto and stadium gates open early at 4:40 p.m. The first 50,000 fans in attendance will receive a Hanley Ramirez “I See You” bobblehead presented by Doritos Dinamita.

Skylar Dayne, 16-year old YouTube sensation and Kenley Jansen’s friend from Curacao, will sing the national anthem. Adam Scott will throw the ceremonial first pitch and announce the Dodgers’ starting line-ups. Scott is best recognized for acting and directing in the movie “Step Brothers” and for his role on HBO’s “Eastbound & Down.” He is currently starring as Ben Wyatt on NBC’s hit comedy “Parks and Recreation.”

U.S. Army Veteran Jonathan Hernandez, born in San Jose, Costa Rica, will sing the national anthem. Hernandez served in Kuwait and Iraq in 2005. His accolades include an Army Achievement Medal and an Army Commendation medal. Actress, dancer and singer Julianne Hough will throw the ceremonial first pitch. Hough is known for her starring roles in recent movies “Footloose,” “Rock of Ages” and “Safe Haven.” Her grandfather, Bob Hough, was the PA Announcer for the AAA Spokane Indians, formerly affiliated with the Dodgers.

Wednesday’s Veteran of the Game is U.S. Army National Guard Specialist Jasen Watts of Northridge. Watts served as an infantryman and was deployed to Iraq in 2005 in support of Operation Iraqi Freedom. While he was conducting a combat patrol, his vehicle was struck by an IED sustaining injuries that resulted in more than 12 surgeries. His numerous accolades include the Combat Infantry Badge, Purple Heart and Valorous Unit Award.

Tickets for games Monday through Wednesday against Colorado can be purchased by visiting www.dodgers.com/tickets or by calling 866-DODGERS.