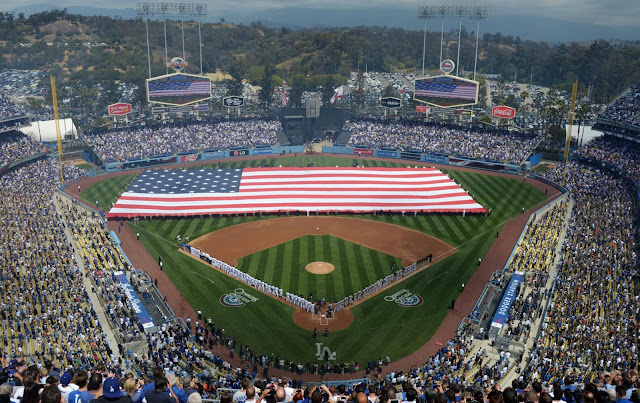 Thanks to everyone that sent me this news last week. It's nothing official but ESPN is now reporting that the Anaheim Ducks and the Los Angeles Kings will play a outdoor game at Dodger Stadium on January 25, 2014.

It's not a Winter Classic game. More from ESPN - {linked here}

The NHL is in the final planning stages of its much-anticipated series of outdoor stadium games next season with six outdoor contests set to take place in football and baseball stadiums across North America, sources familiar with the plan confirmed to ESPN.com Tuesday.

The series will start with the annual Winter Classic, recently confirmed for Ann Arbor, Mich., on Jan. 1, 2014, and will continue with games in Los Angeles, New York, Chicago and Vancouver.

The league hopes to unveil the additional games in the next two weeks.

The details of the various games -- significant undertakings for the NHL and the teams involved -- remain fluid and there remains the potential for change based on team approval, licensing and contractual issues with the various facilities.

Among the new games will be the first outdoor regular-season game in California, with the Anaheim Ducks and the Los Angeles Kings set to do battle at Dodger Stadium on Jan. 25.

That game will be the first of three outdoor games planned for the days leading up to Super Bowl XLVIII on Feb. 2, 2014, at MetLife Stadium in New Jersey.

The ambitious plan would latch onto the media and fan attention in the New York area during Super Bowl week by having the New York Rangers play two outdoor games at Yankee Stadium -- against the New Jersey Devils on Jan. 26, and New York Islanders on Jan. 29.

The Rangers will be the visiting team for both games, a source told ESPNNewYork.com.

The final two outdoor adventures would take place during Hockey Weekend Across America, which runs Feb. 28 to March 2. The Pittsburgh Penguins will take on the Chicago Blackhawks at Soldier Field on March 1.

That game would mark the second time Chicago will have hosted an outdoor game, with Detroit in the Winter Classic at Wrigley Field in 2009. Pittsburgh also has hosted a Winter Classic in 2011 and played in the first one in Buffalo in 2008.

A day later, on March 2, the Canadian-based Heritage Classic will return for its third go-round (second as a full-fledged NHL event) with the Vancouver Canucks hosting the Ottawa Senators at B.C. Place. The last Heritage Classic was held in Calgary between the Flames and Montreal in 2011.

This is going to be a hot ticket. Ducks vs Kings at Dodger Stadium? Should be fun!
Posted by Roberto Baly at 7:00 AM

before i tell you about free cheats and coins i want to make sure that
webpage for free brave frontier hacks online.