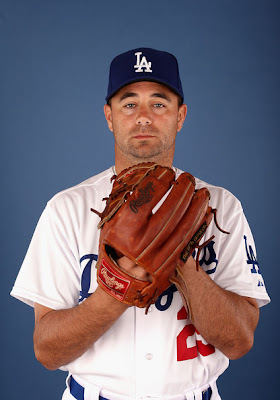 The Los Angeles Dodgers today reinstated left-handed pitcher Ted Lilly from the disabled list and optioned catcher Tim Federowicz to Triple-A Albuquerque. Lilly, who will start tonight’s game at New York, has been on the disabled list since March 28 recovering from his September 21, 2012 left shoulder labrum surgery and made three rehab starts for Single-A Rancho Cucamonga and Triple-A Albuquerque. Lilly last pitched on April 16 for Rancho Cucamonga at Lake Elsinore, allowing four runs (three earned) on seven hits and throwing 81 pitches in 5.0 innings. The 37-year-old last pitched in a Major League game on May 23, 2012.

Federowicz, who was recalled on April 17, has appeared in three games for the Dodgers this season and gone 0-for-5, including popping out as a pinch-hitter in last night’s contest.
Posted by Roberto Baly at 2:30 PM