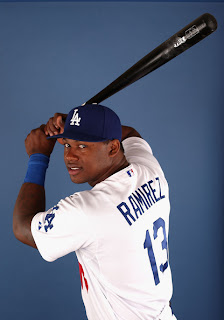 The Los Angeles Dodgers today placed left-handed pitcher Clayton Kershaw on the bereavement list and reinstated shortstop Hanley Ramirez from the 15-day disabled list. Ramirez played a combined 12.0 innings at shortstop, while going 3-for-6 with a double and three RBI at the plate in two rehab games this weekend for Single-A Rancho Cucamonga. The 29-year-old was injured during the championship game of the World Baseball Classic after going 5-for-22 with two homers and three RBI in eight tournament games for the Dominican Republic and underwent surgery on March 22 to repair the ligament in his right thumb. Prior to the WBC, Ramirez appeared in six Spring Training games, going 5-for-15 with four RBI.

By rule, Kershaw must remain on the bereavement list for a minimum of three games, but no longer than a maximum of seven games.
Posted by Roberto Baly at 6:15 PM

Is there anyway possible we can bring back Nathan Eovaldi and josh Lindblom?? How about we give away Matt Kemp, and Mr too good for the minors Lilly, who couldn't strike out a little leaguer today. I'm a fan till the end but *#%@ Kemp and his lack of hustle!!

Thanks for the info, maybe I can use this ended my tufted marketing and I've been use untold anulus media in run a interaction and they someone existing a big amend on me. Agen Ibcbet