Another award for the power hitter Clayton Kershaw - 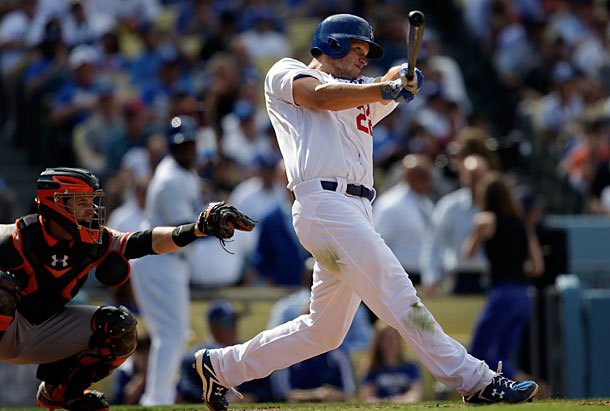 
Los Angeles Dodgers starting pitcher Clayton Kershaw has been named National League Player of the Week for the period ending April 7th. The announcement was made earlier today on MLB Network.

Kershaw went 2-0 in two starts last week and did not allow a single earned run in a Major League-high 16.0 innings of work. His 0.00 ERA ranked tied for first among Major League starters. His two victories ranked tied for first in the Majors and were tops in the N.L., while his 16 strikeouts were good for third-most in the Senior Circuit. Kershaw earned the win in his first decision of the 2013 campaign with an Opening Day performance for the record books, tossing a complete-game shutout and clubbing a game-winning homer in a 4-0 victory over the visiting San Francisco Giants. According to the Elias Sports Bureau, the Texas-native became just the second pitcher in Major League history to hit a home run and throw a shutout in his team’s season opener, joining Cleveland Indians hurler Bob Lemon, who homered in his Opening Day one-hitter against the White Sox on April 14, 1953. In addition to hitting an eighth-inning blast that broke a scoreless tie, Kershaw held San Francisco batters to four hits while fanning seven and not issuing a walk. The 25-year-old needed just 94 pitches (65 strikes) in his 9.0 innings of work to dispatch the defending World Series Champions. The shutout extended Kershaw’s streak of three consecutive Opening Day starts without allowing a run (also: April 5, 2012 at San Diego and March 31, 2011 vs. San Francisco). It was the sixth shutout of his career and his third against the N.L. West-rival Giants. On Saturday, Kershaw continued to stymie opposing hitters, allowing just two hits in 7.0 scoreless innings on the way to a 1-0 victory over the Pittsburgh Pirates at Dodger Stadium. The two-time All-Star has not allowed a run in his last 20.0 innings dating back to his final start of the 2012 season, which is the second-longest streak of his career (22.0 innings, May 8-19, 2012). This is his third career N.L. Player of the Week honor for the 2011 N.L. Cy Young Award winner (also: June 20-26, 2011 and May 14-20, 2012).

In recognition of his National League Player of the Week Award, Clayton Kershaw will be awarded a watch courtesy of Game Time, the leader in licensed sports watches, available at MLB.com.
Posted by Roberto Baly at 2:00 PM