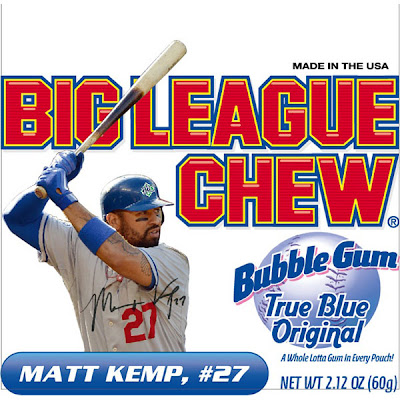 Matt Kemp didn't get to be on the cover of MLB 13: The Show. Andrew McCutchen won that competition.

But hey, Kemp gets to be the face of Big League Chew Bubble Gum!

Shredded gum brand Big League Chew will debut national packaging that will feature an active athlete -- Los Angeles Dodgers outfielder Matt Kemp -- instead of the cartoon characters that have existed on more than 500 million pouches since Big League Chew first hit shelves 33 years ago. In June, a picture of Kemp will adorn the front of the gum package.

The brand, through a partnership with PLB Sports, a maker of athlete-endorsed food products, also has signed Philadelphia Phillies pitcher Cole Hamels.

Not as exciting as a video game but kinda cool.
Posted by Roberto Baly at 7:00 AM