This episode was to air last October, right after the World Series. Not sure what happened but it didn't air. You can watch it this Sunday. Check your local listings.

Matt Kemp and Andre Ethier gets animated Sunday on Fox's "The Cleveland Show," when they provide their voices along with Joey Votto, David Ortiz and Jimmy Rollins. 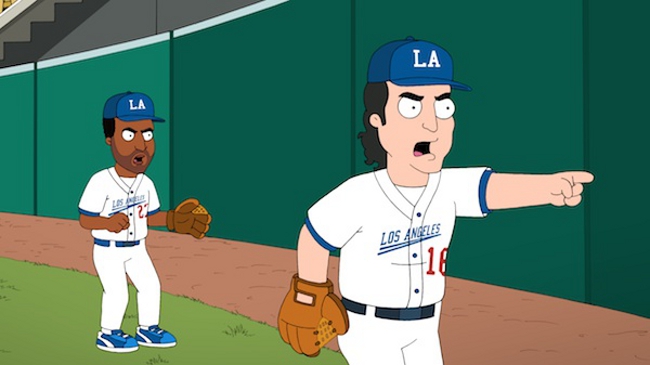 The Browns pack their bags and move to Los Angeles, where Cleveland pursues his life-long dream of becoming a major league baseball scout. But when he receives a cold welcome from star players Matt Kemp and Andre Either (guest-voicing as themselves) and he unsuccessfully recruits David Ortiz, Jimmy Rollins and Joey Votto (guest-voicing as themselves), he winds up longing for the simple life in Stoolbend. Meanwhile, Donna and the kids become obsessed with the glitzy L.A. lifestyle, and Cleveland befriends a struggling actress (guest voice Ritter) who helps him realize that Hollywood isn’t as glamorous as it seems in the all-new “California Dreamin’ (All the Cleves are Brown)” episode of THE CLEVELAND SHOW.

Video: Andrew Ethier, Matt Kemp and Joey Votto take you behind the scenes of "California Dreamin'".

Kemp - Baseball is pretty much easier than trying to act.