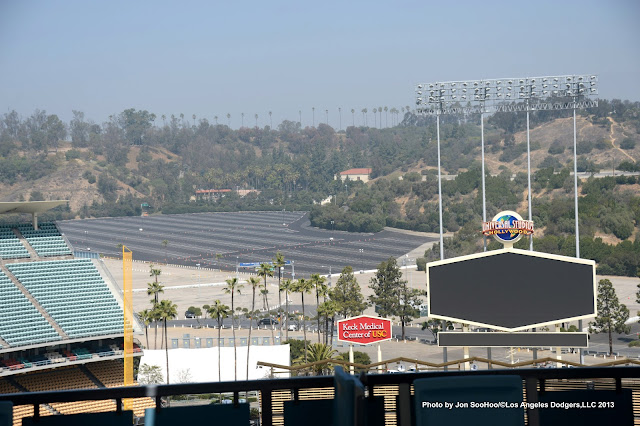 The Los Angeles Dodgers today unveiled enhancements to Dodger Stadium made during a winter-long, $100 million project as the team prepares to begin its 52nd season in the iconic stadium. The enhancements will literally touch everyone attending a game this season.

Upgrades and amenities include:

New high definition video boards in left field and right field. Message boards, including ribbon boards at the Loge level and outfield wall, were also replaced with the new technology. The unique hexagon shape of both outfield video boards was restored.

New sound system designed to minimize echoes in the stadium

Wider concourses and additional locations for wheelchair-bound fans and their companions on all levels, as well as “drink rails” for fans who may wish to leave their seats during the game to explore the stadium

All stairwells have new lighting and signage

“We have worked extremely hard during the off-season to create the best possible experience for ALL our fans for the 2013 season,” Dodger President and CEO Stan Kasten said. “The upgrades were designed with particular emphasis on the Top Deck and Reserve levels and outfield pavilions that had been essentially untouched since the stadium first opened. Our goal is to provide THE most pleasurable experience from the time fans arrive at the stadium until the time they depart, ideally after a Dodger victory.

“We are confident our fans will be delighted with what they experience at the stadium this season. We look forward to receiving feedback from our fans as we continue to work diligently to enhance their experience.”

Restrooms in the pavilions were relocated under the pavilions as an added convenience.
As part of the upgrades, the Dodgers are going green, instituting many measures toward being energy efficient. Included in the construction was installation of new water valves, low-flush fixtures, waterless urinals, hand-driers to eliminate paper waste, automatic faucets to control water flow and new power and lighting energy-efficient systems.

The Dodgers increased the number of positions for wheelchair patrons on the Loge, Reserve and Top Deck levels. Each position has a companion seat and is positioned so these patrons have improved views of the game, even if someone stands up in front of them.
The team is adding fan services representatives on all levels as part of its commitment to providing the best customer service in sports.

Many of the Dodgers’ historical items will be displayed for the first time. Fans will be able to enjoy Dodger memorabilia and artifacts such as MVP awards, Cy Young awards and Gold Gloves awarded to Dodgers. Some items are on display during games and others will be available during daily tours of the stadium

New signage around the stadium is patterned after original drawings consulted in the Walter O’Malley archives.

Following is a level-by-level list – from top to bottom -- of enhancements made to Dodger Stadium for the 2013 season. The project was overseen by Janet Marie Smith, Senior VP of Planning and Development, who is known throughout the sports world for her work with the Baltimore Orioles (Oriole Park at Camden Yards), Boston Red Sox (Fenway Park) and Atlanta Braves (Turner Field). Smith’s accomplishments are recognized in Baseball’s Hall of Fame in Cooperstown, NY.

-- Entry gates extended out 30 feet to enlarge the concourse. Each gate will feature some special Dodger memorabilia, including oversized baseballs autographed by winners of the Cy Young Award and life-size bobbleheads featuring uniforms worn by the Dodgers through the decades.
-- All restrooms enlarged. Family restrooms added along with water fountains.
-- New concession areas, including new stands, cooking facilities and menus.
-- A team store on the left-field side and another will be completed on the right-field side on a date TBD
-- Kids play areas on the first-base and third-base side
-- Expanded concourse allows for more standing room with views of the game and more space for fans in wheelchairs and their companions
-- Life-size replicas of bobbleheads and MVP, Cy Young and Gold Glove awards at entry plazas

-- The United Suite Concourse houses a display of Dodger yearbook covers, media guide covers and other team memorabilia. The Los Angeles Dodgers Foundation baseball display was relocated from the breezeway lobby reception area by the Dodgers’ office to outside the press box. A new display of team media guides was created in the lobby area

-- New concession areas, including new stands, cooking facilities and menus
-- All restrooms were enlarged. Family restrooms were added, along with water fountains and a fan service area.
-- Patio boxes for group seating in a casual setting were created at the back of the concourse
-- Wider concourse and additional locations for wheelchair-bound fans and their companions and standing room with drink rails beyond the foul poles
-- Enhanced lighting
-- Murals depicting Dodger history

-- New entry plazas to create standing room areas with a view of the game
-- Wider concourse, drink rails and additional locations for wheelchair-bound fans and their companions
-- Reduced number of Prime Ticket Club seats along foul lines to improve sightlines (from 1066 to 640), with wheelchair positions on the front row. As a result, there will be an additional six feet of foul territory on left field and right field foul lines

-- Hallway leading to Dugout Club was repainted and received wood wainscoting treatment with display cases featuring Dodgers Gold Glove, MVP, Cy Young and Rookie of the Year awards. This area is available to all fans on daily guided tours of the stadium.

-- In both left and right field, new and larger restrooms were created more conveniently located under the pavilions. Picnic areas were added.

-- New High Definition video boards in left field and right field are the first 10mm 1080p light emitting diode (LED) displays in MLB.  While the new scoreboard structures are 22 percent larger, the active viewing area of both video boards is 66 percent larger than before. Existing message boards, including ribbon boards at the Loge level and outfield wall, were replaced with the new technology as well.  The unique hexagon shape of both scoreboards has been restored.

Sound System
-- A new sound system directed to each seating section will minimize echoes and sound migration outside the stadium and will provide for a much more enjoyable audio experience for fans as they listen to live and recorded music and announcements before, during and after games.
Wi-Fi
-- A state-of-the-art Wi-Fi network and cellular antenna system to support cell-phone and internet connectivity from mobile devices will enhance the ability of fans and media covering games at Dodger Stadium to communicate. The project was part of a partnership with Major League Baseball Advanced Media and is expected to be completed in June. An entirely new electrical power grid with seven new substations was added to support these technologies.
Clubhouse

-- A new home team clubhouse, expanded and enhanced training/conditioning areas, and new batting cages for both teams
Posted by Roberto Baly at 4:30 PM

sounds good! did u go tonite? will b there apr 6