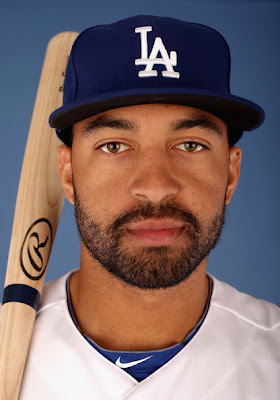 PLAY BALL!: The Dodgers take on the Mariners for the second of three times this spring after falling to Seattle, 9-5, last Saturday in Peoria. The clubs will meet one final time on March 27 in Peoria in the Dodgers’ Cactus League finale. Los Angeles was no-hit by six Seattle pitchers (including current Dodger Brandon League) on June 8, 2012, but bounced back to take two of three from the Mariners last season at Safeco Field. The Mariners, however, hold a 13-12 advantage in 25 all-time meetings between the clubs.

Matt Kemp is the designated hitter in the Dodger lineup today and will be the club’s last DH of the spring as pitchers are expected to start hitting in tomorrow’s game against the Rockies at Talking Stick.

THAT NEVER HAPPENED: The Dodgers were washed out in both games yesterday with the club leading both games at the time of cancellation due to rain. In Scottsdale, Los Angeles led 3-0 when the game was banged in the second inning, while in Glendale the Dodgers held a 3-1 advantage over the Reds when the tarp crew was summoned. Chris Capuano was among the notable performances against the Reds that won’t show up on a stat sheet, allowing one run on two hits with three strikeouts in 4.0 innings, along with Dee Gordon (1-for-2, 2B, SB) and Scott Van Slyke (1-for-2, 2B, 2 RBI).

A number of Dodgers continue to rank among the National League leaders with Yasiel Puig batting .423 on the spring (8th, NL), Dee Gordon stealing five bases (1st, NL) and Jeremy Moore pacing the circuit in doubles (5, NL). In addition, Gordon is tied for the NL lead with six walks, and Andre Ethier’s two triples are tied for tops in the NL.

The Dodgers continue to lead all National League clubs with a .307 team batting average and a .386 team on-base percentage through 13 Cactus League games.

EXTRA ARMS: Tommy Davis will throw a ceremonial first pitch prior to this afternoon’s game against the Mariners. Davis, a two-time NL batting champion in 1962 and 1963, is in camp this weekend along with Ron Cey as a guest instructor. The three-time All-Star played in 18 Major League seasons, including eight seasons in Dodger blue from 1959-66.

Tonight, Hall of Fame Manager Tommy Lasorda will have first pitch honors at the World Baseball Classic game between the United States and Italy at 7:00 pm at Chase Field.

VIVA LOS DODGERS: Dodger players continued to play key roles in the World Baseball Classic yesterday with Luis Cruz and Adrian Gonzalez combining to drive in all five Team Mexico runs in its 5-2 win over the United States last night. Gonzalez, who reached base four times, had three RBI, including a two-run homer off R.A. Dickey in the third inning. Mexico takes on Canada today at 12:30 pm in its third and final game in pool play.

Team Italy continues to be the talk of the tournament and yesterday, Nick Punto went 2-for-4 with two runs scored in Italy’s 14-4 win over Canada. Italy wraps up pool play with a game against Team USA tonight at 7:00 pm.

Hanley Ramirez and the Dominican Republic also return to action this morning at 9:00 am against Spain, while Ronald Belisario and Venezuela take on Puerto Rico at 3:30 pm.

OPEN SESAME: The Dodgers ticket sales department will host another Open House tomorrow, where fans interested in purchasing a mini plan or season tickets can stop by Dodger Stadium from 10 a.m. until 2 p.m. Complete details on this event can be found by visiting www.dodgers.com/openhouse. Dodger season tickets start at just $6 per game.

HILLTOPPERS: RHP Aaron Harang last pitched on Monday, tossing 3.0 scoreless innings in a minor league game. The 34-year-old has made just one official Cactus League appearance this spring, allowing four runs on five hits in 2.0 innings, but picking up the win on Feb. 27 against the Cubs in Mesa.

RHP Brandon League will make his third “official” appearance of the spring, but last pitched on Wednesday with a scoreless inning against Team Mexico at Camelback Ranch. The former Mariner faced his old ‘mates on Saturday in Peoria in his last Cactus League appearance, allowing three runs (one earned) in 1.0 inning.

RHP Kenley Jansen last pitched on Wednesday with two strikeouts in a scoreless frame against Team Mexico. He has made only one “official” appearance this spring with a scoreless inning against the Giants on Feb. 26.

LHP J.P. Howell fired a 1-2-3 inning against Team Mexico on Wednesday in his last appearance after allowing two runs in 2.0 innings in his two Cactus League outings.
Posted by Roberto Baly at 11:00 AM