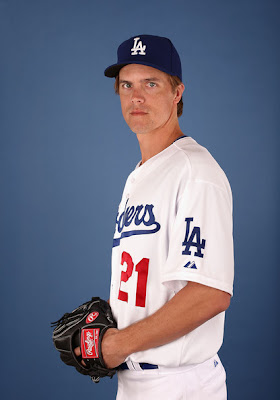 SHADES OF BLUE: The Dodgers play the Royals for the third and final time this spring after beating Kansas City, 8-1, on March 15 at Camelback Ranch and losing, 7-2, on March 20 in Surprise. The clubs haven’t met in the regular season since 2005 and the Royals hold a 4-2 advantage in the all-time series.

The Dodgers will open the 2013 season against the Giants in just one week, April 1 at Dodger Stadium!

Los Angeles continues to lead National League clubs with a .350 on-base percentage and 97 walks this spring. Once on base, the Dodgers have been active on the basepaths, leading the NL with 35 steals.

On the mound, Dodger pitchers have struck out a Major League-best 240 batters.

ON THE HILL: Tonight, Zack Greinke will face the Royals, who originally selected him with the sixth overall pick in the 2002 First-Year Player Draft. Greinke pitched in Kansas City for seven seasons from 2004-2010, compiling a 60-67 record with a 3.82 ERA and winning the 2009 Cy Young Award, before he was traded to Milwaukee in December 2010. He will make his third start of the spring and his first since March 1 after battling the flu and right elbow inflammation. Greinke last pitched on March 20 in a minor league game, throwing 43 pitches in 4.0 scoreless innings. He allowed one hit, hit a batter and struck out two in the outing.

Earlier today, Chris Capuano pitched in a minor league game on the back fields against the Indians. He threw 85 pitches in 7.0 scoreless innings, allowing three hits, hitting a batter and striking out 11.

LEADERBOARD: Yasiel Puig went 0-for-2 yesterday, but continues to lead the Majors with a .527 batting average and 29 hits. Puig leads the NL with a .509 on-base percentage and ranks second with an .855 slugging percentage. He also ranks third with 16 runs scored.

Dee Gordon leads the NL with seven steals and is tied for fourth in the NL with 10 walks.

FEELS LIKE ONLY YESTERDAY: Carl Crawford and Andre Ethier homered, but the Dodgers fell, 7-4, to Oakland yesterday at Phoenix Municipal Stadium.  Josh Beckett, who entered the game with a 0.96 Cactus League ERA, was tagged for seven runs on six hits and three walks in 4.0 innings in a losing effort, but the Dodger bullpen was able to keep it close with Kevin Gregg (1.00 ERA), Ronald Belisario (2.70 ERA), Paco Rodriguez (1.80) and Josh Wall (4.22 ERA) each throwing a scoreless inning of relief.

With two hits yesterday (2-for-3), Carl Crawford raised his batting average to .333 (6-for-18) in six games this spring. Crawford played 5.0 innings in the field yesterday without issue and is penciled back in the leadoff spot in left field in Don Mattingly’s lineup tonight.

After his home run yesterday, Andre Ethier is also batting .333 (14-for-42) in 17 games this spring with a .417 on-base percentage and a .619 slugging percentage. Of Ethier’s 14 hits, eight have gone for extra bases (five doubles, two triples and a home run).

BIRTHDAY BOY:  The Dodgers would like to wish a very happy 26th birthday to left-hander Hyun-Jin Ryu! Ryu has gone 2-2 with a 3.86 ERA in six games (five starts) in his first Major League Spring Training and is scheduled to make one final tuneup on Thursday against the Angels in Anaheim in the Freeway Series opener.

HOME SICK:  The Dodgers will return to Southern California on Thursday for a split-squad exhibition game at The Epicenter against the Single-A Rancho Cucamonga Quakes at 6:05 p.m. and a contest against the Angels in Anaheim for the first game of the three-game exhibition Freeway Series set for 7:05 p.m. at Angel Stadium. The Freeway Series continues Friday with a 7:10 p.m. game at Dodger Stadium and wraps up Saturday with a 6:05 p.m. game in Anaheim.

The split squad of Dodgers heading to Rancho Cucamonga, headlined by Adrian Gonzalez and Luis Cruz, will be managed by Hall of Famer Tommy Lasorda. Tickets to the exhibition game can be purchased at www.rcquakes.com.