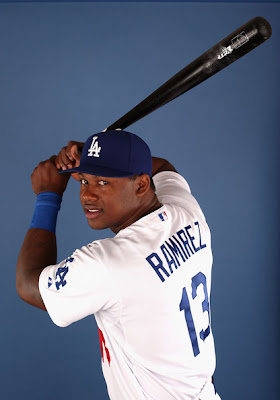 DODGER ROYALTY: The Dodgers take on the Royals for the second and final time this spring after defeating Kansas City, 8-1, on March 15 in Glendale. The clubs haven’t met during the regular season since 2005 and the Royals have the upper hand in the all-time series, 4-2. In case you’re counting, Opening Day against the Giants is just 12 days away!

On the back fields at 1:00 p.m., Zack Greinke, Brandon League and J.P. Howell will all pitch in minor league games. Greinke is expected to throw around 45 pitches.

COSTLY VICTORY: Congratulations are in order for Dodger shortstop Hanley Ramirez and minor league right-handed pitcher Angel Castro on the Dominican Republic’s undefeated run to the World Baseball Classic title, capped off with a 3-0 win over Puerto Rico last night. Ramirez went 1-for-2 in the championship game before he was removed with an apparent thumb injury. He is expected back in Arizona this afternoon and will have an MRI to determine the severity of the injury. He finished the eight-game tournament by going 5-for-22 with two homers and three RBI.

With Ramirez traveling and Dee Gordon out of the lineup with an ankle injury, Luis Cruz will make his first start of the spring at shortstop today. Last year, Cruz appeared in 24 games (23 starts) at shortstop, posting a .981 fielding percentage and committing just two errors in 205.1 innings.

BIRTHDAY BOY: The Dodgers would like to wish a very happy birthday to Pat Corrales, who is in his first season with the Dodgers as a special advisor to the GM. Corrales was the first Major League manager of Mexican-American descent and managed for nine years in the big leagues with the Rangers (1978- 80), Phillies (1982-83) and Indians (1983-87) following a nine-year playing career as a catcher.

FEELS LIKE ONLY YESTERDAY: The Dodgers jumped out to an early 3-0 lead yesterday with Yasiel Puig and Jerry Hairston Jr. hitting back-to-back first-inning homers and Chris Capuano delivered 5.2 strong innings as Los Angeles downed Oakland, 7-1, at Camelback Ranch. In addition to Puig and Hairston, Juan Uribe and Skip Schumaker added multi-hit games as the Dodger offense finished the game with 13 hits, including five for extra bases. The Dodger bullpen of Mark Lowe (1.1 IP), J.P. Howell (1.0 IP) and Brandon League (1.0 IP) was equally as impressive, allowing just two baserunners (hit, walk) to close out the game with 3.1 scoreless innings.

ON THE HILL: Aaron Harang will make his fourth start of the spring today against the Royals after last pitching on Friday against the Padres. Harang allowed five runs (four earned) in 4.0 innings in that outing and has gone 1-0 with a 10.00 ERA in his three Cactus League starts. Last season, Harang posted a career-low 3.61 ERA while going 10-10 in 31 starts with the Dodgers.

This will mark the Dodgers’ third annual benefit game in Tucson dating to 2011, when the Dodgers and Arizona Diamondbacks played a similar benefit game in Tucson with all proceeds going to the Tucson Together Fund. In addition, The Los Angeles Dodgers Foundation, in partnership with the Diamondbacks, dedicated a Dodgers Dreamfield in Oro Valley, AZ, on a field that was re-named in memory of Christina-Taylor Green.
Posted by Roberto Baly at 12:30 PM