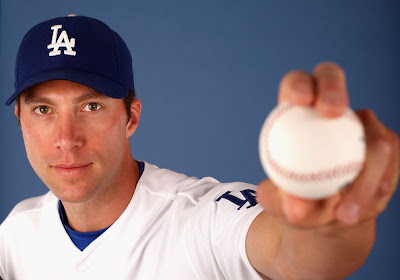 HELLO NEIGHBOR: The Dodgers will make the quick trip to Peoria this afternoon to take on the Mariners in the first of three matchups vs. Seattle this spring. Los Angeles will also travel to Peoria Stadium to play Seattle in its final Cactus League game on March 27 and the Mariners come to Camelback Ranch on Friday, March 9. In case you’re counting down the days, the Dodgers are just 30 days away from Opening Day vs. the Giants!

WHOOPS: The Dodgers dropped both contests yesterday, losing 16-8 to the Angels in Tempe and 7-5 to the Padres in Glendale. Luis Cruz (3-for-3), Hanley Ramirez (2-for-3) and Wilkin Castillo (2-for-3) all had multi-hit games while Paco Rodriguez, Kevin Gregg and Eric Eadington all tossed scoreless baseball.

*         There will be just one minor leaguer making the trip to Peoria and his name is Ryan Acosta. Acosta, a right-handed pitcher, will wear No. 82.

C.C. ON THE OTHER COAST: Dodger lefty Chris Capuano will make his first spring start and second appearance of the spring today in Peoria. Capuano gave up four runs in 2.0 innings last Monday, yielding two home runs. The Massachusetts native had a career-best 3.72 ERA for Los Angeles in 2012.

*         RHP Ronald Belisario is making his third appearance this afternoon and will depart for the World Baseball Classic tomorrow. Belisario will join the Venezuelan team in Puerto Rico for their first game on March 7 vs. Hanley Ramirez and the Dominican Republic.

*         Dodger closer Brandon League will make his second appearance of the spring. League gave up a solo homer in his lone inning of work on Feb. 26 vs. San Francisco.

HOT HITTERS: The Dodgers are hitting a National League-best .308 as a team, paced by the red-hot Brian Barden, who is 7-for-11 (.636) thus far. Barden gets the start at first base today and has also played right field, left field and third base. Batting cleanup in the lineup is Luis Cruz, who is hitting .417 (5-for-12) with two doubles, two homers and a team-leading five RBI. Cruz is tied for eighth in the Cactus League with 13 total bases and has played 20.0 innings at third base. Dee Gordon leads the club in innings played thus far, logging 29.0, all at shortstop.

BIG DOINGS: Dodger greats Eric Karros and Shawn Green are in uniform at Camelback Ranch and Hall of Fame skipper Tommy Lasorda addressed the team this morning. Tomorrow, the Dodgers will hold their annual “Dodger Idol” competition in which players in their first big league camp perform some musical ditties to the delight of their teammates.

*         Dodger legends Ron Cey and Tommy Davis will arrive Friday, March 8 and spend a few days in camp working with the squad.

AND THAT’S THE WAY IT IS: Dodger broadcaster Charley Steiner may have missed the last two games with a frog in his throat, but he should be back to full strength in time to be a guest lecturer at the Walter Cronkite School of Journalism at Arizona State on Monday. Following that, Steiner will head out to work the World Baseball Classic for MLB International and head back to Glendale in the middle of March.

BE THERE!: The Dodgers ticket sales department will host another Open House tomorrow morning in which fans interested in purchasing a Mini Plan or season tickets can stop by Dodger Stadium from 10 a.m. until 3 p.m. Complete details on this event can be found by visiting www.dodgers.com/openhouse. Dodger season tickets start at just $6 per game.

*         While there, fans can check out the construction of the Dodgers’ new scoreboards. Thursday, ANC announced details of the displays, which are designed in the historic hexagonal shape of the stadium’s original scoreboard and will feature a total active viewing area of approximately 2488 square feet. The scoreboards will feature the highest pixel densities in Major League Baseball.
Posted by Roberto Baly at 12:00 PM