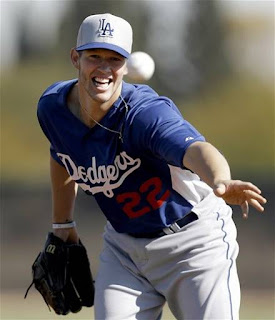 NORTH VS. SOUTH: The Dodgers play their California neighbors to the north, the Oakland Athletics, today at Camelback Ranch – Glendale. The A’s swept the Dodgers last year in Oakland and hold a 9-16 advantage in the all-time regular season series. The clubs have met twice in the World Series, splitting their 10 games, with the A’s winning the 1974 Fall Classic and Los Angeles claiming the title in 1988.  The Dodgers and Athletics will meet one more time during Cactus League play with a second meeting on Sunday at Phoenix Municipal Stadium.

*         Kershaw is scheduled to make his third consecutive Opening Day start against the Giants on April 1, just 13 days away!

AROUND THE WORLD: Last night, the Dominican Republic advanced to tonight’s World Baseball Classic championship game by defeating the Netherlands, 4-1, with Hanley Ramirez going 1-for-3 with a walk. After joining Team Netherlands in San Francisco for the semifinal round, Kenley Jansen did not appear in the game and reported back to Dodger camp today.

KING OF THE HILL: Left-hander Chris Capuano will make his fourth appearance of the spring (third start) after allowing five runs on six hits in 4.1 innings in his last start, Thursday against the Cubs. Capuano, 34, went 12-12 with a career-low 3.72 ERA last season in 33 starts with the Dodgers.

FEELS LIKE ONLY YESTERDAY: The Dodgers pounded out 12 hits yesterday, but fell, 5-3, to the Diamondbacks in Glendale. Carl Crawford made his second start of the spring as the designated hitter and picked up his first two hits, going 2-for-3 with a two-run single in the fifth inning. Adrian Gonzalez went 2-for-3 with a double for his second multi-hit game in a row, raising his Cactus League batting average to .300 in 12 games.

*         Dee Gordon leads the NL with seven steals and is tied for third on the circuit eight walks.

GIVING BACK: Today, the Dodgers will host local youth from the Holiday Park Little League and Glendale Youth Project for a Spring Training game and baseball clinic. Dodger infielder Dee Gordon, outfielder Alex Castellanos and coach Manny Mota will conduct the clinic for approximately 60 youngsters from a low-income area of Glendale. The clinic will take place in the outfield of the main stadium shortly after the conclusion of today’s game.

TUCSON-OLOGY:  Yesterday, the Dodgers held their annual Tucson-ology draft to determine who would make the trip to Tucson on Thursday to play in the Christina-Taylor Green Memorial Foundation benefit game against the Cubs. The lucky winners were Matt Kemp, Andre Ethier, Mark Ellis, A.J. Ellis, Nick Punto, Skip Schumaker and Stephen Fife, who will make the start.

*         This will mark the Dodgers’ third annual benefit game in Tucson dating to 2011, when the Dodgers and Arizona Diamondbacks played a similar benefit game in Tucson with all proceeds going to the Tucson Together Fund. In addition, The Los Angeles Dodgers Foundation, in partnership with the Diamondbacks, dedicated a Dodgers Dreamfield in Oro Valley, AZ on a field that was re-named in memory of Christina-Taylor Green.
Posted by Roberto Baly at 12:30 PM