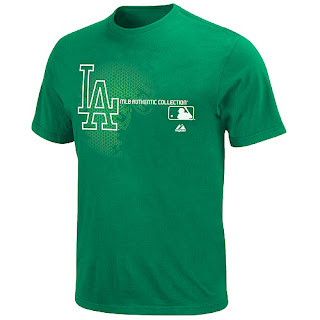 DEBUT IN DODGER GREEN:  Carl Crawford is set to make his Dodger debut today, batting leadoff as the designated hitter against the Brewers. Crawford, who was obtained from Boston on Aug. 25, 2012 in the Los Angeles-record nine-player swap, last suited up in a Major League game on Aug. 19, 2012 and has been recovering from Aug. 23 Tommy John surgery. The 31-year-old has a .292 career batting average in 11 big league seasons and leads all active players with 114 triples, while ranking third with 432 stolen bases.

BLANKED: The Dodgers were held to just two hits as they were shut out, 4-0, yesterday against the Rangers in Surprise. Brandon League, who was celebrating his 30th birthday, took the loss, allowing all four Ranger runs on four hits in the seventh inning. Clayton Kershaw made his fifth start of the spring and allowed just two hits, while striking out six, in 6.0 scoreless innings. After allowing nine runs (eight earned) in 8.0 innings in his first three starts, Kershaw has not allowed an earned run (one unearned) in his last two Cactus League starts (11.0 IP).

LEADERBOARD: The Dodgers rank second among National League clubs with both a .281 team batting average and a .348 on-base percentage. Los Angeles leads the league with 27 steals in 37 attempts this spring.

*         Yasiel Puig ranks second among NL players with a .450 batting average, is third with 18 hits, places sixth with a .675 slugging percentage and is tied for third with 11 runs scored.

*         Dee Gordon leads the NL with six steals and is tied for fifth on the circuit with seven walks.

*         Japan takes on Puerto Rico in the first semifinal tonight before the Dominican Republic meets the Netherlands tomorrow. The winners will meet in Tuesday’s tournament final.

START ME UP: In Glendale, Hyun-Jin Ryu will face the Brewers for the second consecutive start after taking the loss on Monday at Maryvale, allowing three runs on five hits in 4.2 innings. Ryu, who will turn 26 on March 25, has 12 strikeouts in 10.2 spring innings in his four appearances (three starts).

*         In Scottsdale, LHP Ted Lilly will make just his third Cactus League start after allowing five runs (one earned) on Tuesday against the Reds in Goodyear. Lilly has held the D-backs to a .230 batting during the course of his career, but has just a 5-8 record with a 4.88 ERA in 15 career games (13 starts) against Arizona.

A D.R. IN THE HOUSE:  The Dodgers have been active in the international free agent market in the past year and yesterday signed a trio of Dominican amateurs; shortstop Dennis Santana from San Pedro de Macoris, shortstop Carlos Aquino from Santiago and left-handed pitcher Cesar Romero from Santo Domingo.

VERO MEMORIES:  On this day in 2008, the Dodgers played their final game at Holman Stadium in Vero Beach, Florida, a 12-10 loss to Houston. Vero Beach hosted Dodger Spring Training for 61 years.

FUTURE DODGERS:  Registration is now available for the 2013 Dodgers Youth Baseball Camp, benefiting the Los Angeles Dodgers Foundation, which will be held June 25-28 (Session 1) and August 9, 12-14 (Session 2) at Dodger Stadium. Register your child today at www.dodgers.com/camp. The camp will feature instruction by Dodger coaches and alumni with special visits by current Dodger players. Enrollment is open to boys and girls, ages 7-12.

TUNE IN:  Matt Kemp and Andre Ethier’s voices will be featured in tonight’s episode of The Cleveland Show tonight at 8:30 pm on FOX as they guest-voice as themselves. In the episode, Cleveland pursues his dream of becoming a Major League Baseball scout.
Posted by Roberto Baly at 11:30 AM

I was at the Brewers game today. Nice win, but of course the Brewers were playing without Braun, Fielder, Weeks, etc. Ryu looked pretty good, particularly after the first inning. Nice games from Ethier and Adrian (2 Hrs). Crawford did nothing in his three at-bats, but he seemed to be running well and he made contact. Baby steps.

with out Fielder? hope he's not hurt. or maybe still playing for Detroit