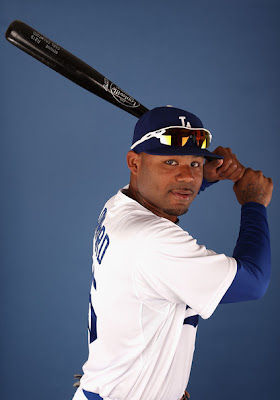 BACK AT THE RANCH: The Dodgers play their ninth Cactus League home game this afternoon, taking on the Chicago Cubs for the third time this spring. Previously, the Dodgers knocked off the Cubs, 7-6 at Camelback Ranch - Glendale on Feb. 25 and, 11-7, in Mesa on Feb. 27. The two teams will also square off on March 21 during a special charity game in Tucson to benefit the Christina-Taylor Green Foundation. When the regular season begins, the Dodgers and Cubs will meet seven times, beginning Aug. 1-4 at Wrigley Field and then from Aug. 26-28 at Dodger Stadium. Los Angeles won the season series, 4-2, last season and according to the Elias Sports Bureau, the Dodgers hold a slim, 1,028-1,023-14, advantage in the franchises’ 2,065 all-time meetings. In case you were wondering, there are just 17 days until Opening Day!

TURN IT AROUND: The Dodgers fell to the Reds in Goodyear on Tuesday night, 6-2, before enjoying an off day Wednesday. The club has lost two straight after going unbeaten in its previous four contests.

Today, Dodger outfielder Carl Crawford will be the designated hitter in a game against Japan’s Meiji University Baseball Club.

THE WORLD IS WATCHING: Congratulations to Dodger infielder Nick Punto on Italy’s successful and surprising run in the World Baseball Classic. Unfortunately for Punto, Puerto Rico’s come-from-behind victory yesterday knocked the Italians out and he will be back in camp tomorrow. Punto hit .421 (8-for-19) with two doubles and five runs scored in five WBC games.

Hanley Ramirez is 2-for-11 with five walks and a .412 OBP in four tournament games for the Dominican Republic thus far. Today at 4 p.m., the D.R. will take on the United States with the winner qualifying for the semi-finals in San Francisco.

MEET THE HURLERS: LHP Chris Capuano will make his third official Cactus League appearance and second start this afternoon. Capuano has given up six runs in 5.0 innings of work and last pitched on March 2 according to the books. However, the southpaw did pitch 4.0 innings against the Reds on March 8 (allowing one run) before the contest was cancelled due to rain.

Dodger reliever and the most interesting man in baseball, Matt Guerrier, will toe the rubber for the fifth time this spring today. Guerrier has posted an ERA of 4.50, allowing two runs in 4.0 innings while striking out five.

RHP Mark Lowe is set to make his team-high sixth appearance vs. the Cubs today. Lowe has allowed four runs in 5.0 innings and the opposition is hitting .364 against him.

Also making his team-leading sixth appearance will be RHP Kevin Gregg, who has been lights out thus far in the Cactus League. Gregg has tossed 5.0 scoreless innings and yielded just one hit without walking a batter.

Dodger reliever Ronald Belisario is back in Spring Training action today as he is scheduled to make his first appearance since leaving for the WBC on March 2. Belisario has given up two runs in 2.2 innings over three Cactus League games this spring.

THE FUTURE IS NOW:  Registration is now available for the 2013 Dodgers Youth Baseball Camp, benefiting the Los Angeles Dodgers Foundation, which will be held June 25-28 (Session 1) and August 9, 12-14 (Session 2) at Dodger Stadium. Register your child today at www.dodgers.com/camp. The camp will feature instruction by Dodger coaches and alumni with special visits by current Dodger players. Enrollment is open to boys and girls, ages 7-12.

LENDING A HAND: On Tuesday morning it was announced that the Los Angeles Dodgers and New York Yankees were the recipients of the 2013 Bobby Murcer Award, given annually by the Baseball Assistance Team (B.A.T.). Named after the former B.A.T. Chairman who introduced the Spring Training Fundraising Tour, the award is given to the team in both the American League (Yankees) and National League (Dodgers) whose players commit the most amount of money to B.A.T. This is the fifth consecutive year that the Yankees have won the award and the third time in four years for the Dodgers. Both Clubs will be presented with the Bobby Murcer Award at the 25th annual “Going to Bat for B.A.T. Fundraising Dinner” in 2014. B.A.T. has awarded more than $28 million in grants to date, benefiting more than 3,000 members of the Baseball Family, including former Major League players, managers, coaches, scouts, umpires, athletic trainers, front office personnel as well as Minor League players, Negro League players, players from the Women’s Professional Baseball League and widows, spouses and children.
Posted by Roberto Baly at 12:30 PM