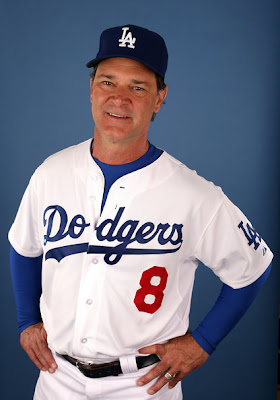 WE WILL ROCK YOU: The Dodgers travel to Talking Stick to take on the Rockies for the first of their two Cactus League meetings. Los Angeles won its last four games against Colorado last year to win the season series, 10-8, and will play the Rockies 18 times during the 2013 campaign, starting on April 29 at Dodger Stadium.

The Dodgers also played the Reds in a “B” game this morning on the minor league side. The only participating players from big league camp were RHP Javy Guerra, RHP Stephen Fife, RHP Steve Ames, RHP Matt Magill and C Matt Wallach.

BATTER UP: After playing 14 games with the designated hitter, Dodger pitchers will bat for the first time today with Clayton Kershaw appearing in the ninth spot in Don Mattingly’s lineup. Kershaw was the Dodgers’ best hitting pitcher last year, ranking seventh among NL pitchers with a .207 batting average and second with 13 sacrifices. Overall, Los Angeles pitchers led the Majors last year with 49 sacrifices, but batted just .119 (11th, NL).

GOING WORLDWIDE: Mexico and Venezuela were eliminated from the World Baseball Classic yesterday, ending the championship dreams of Luis Cruz, Adrian Gonzalez and Ronald Belisario. Gonzalez went 3-for-7 with a home run, three RBI and a .714 on-base percentage in three games, while Cruz hit .273 (3-for-11) with a double and three RBI in the tournament. Cruz and Gonzalez are expected back at Camelback Ranch tomorrow, while Venezuela has one more game in pool play (Spain, 9:30 am). To this point Belisario has made just one appearance, allowing a hit and a walk in 0.2 scoreless innings.

While Hanley Ramirez has just one hit (1-for-6, HR) in tournament play, he has a .500 on-base percentage after drawing four walks. The Dominican Republic wraps up pool play today against Puerto Rico at 4:30 pm and has already advanced to the next round.

Nick Punto and Team Italy lost to the United States yesterday, 6-2, but will advance to the second round in Miami with a 2-1 record. Punto is batting .417 (5-for-12) with two doubles in three games.

HILLTOPPERS: LHP Clayton Kershaw will make his fourth start of the spring today after allowing four runs on seven hits in 3.0 innings on Tuesday against the Padres in Peoria. Kershaw has allowed nine runs (eight earned) in 8.0 Cactus League innings, but has struck out 12 and walked only one. Kershaw made two starts against Colorado last year, going 1-0 with a 2.93 ERA (5 ER/15.1 IP), and is 7-4 with a 3.82 ERA in 18 career starts against the Rockies.

RHP Mark Lowe will make his fifth appearance of the spring after allowing four runs on three hits, including an Adrian Beltre home run, on Thursday against his former team, the Rangers. Lowe did not allowed an earned run (one unearned) in his first three Cactus League outings.

RHP Peter Moylan last pitched on Thursday against the Rangers, allowing just one hit, a two-run homer by Konrad Schmidt, in an inning of work.

RHP Josh Wall allowed his first run of the spring in 1.2 innings on Thursday against the Rangers after tossing 3.0 hitless, scoreless frames in his first three spring appearances. Wall has seven Ks in 5.0 Cactus League innings and has limited opponents to a .167 average (3-for-18).

COMEBACK KIDS: Alex Castellanos blasted a two-run homer, his third of the spring, in the seventh inning yesterday to give the Dodgers a 3-2 come-from-behind victory over Seattle in front of 10,330 fans at Camelback Ranch. Aaron Harang allowed two runs in 3.0 innings before the Los Angeles bullpen took over with scoreless innings from Shawn Tolleson, Kenley Jansen, Brandon League, J.P. Howell, Kevin Gregg and Paco Rodriguez.

The Dodgers continue to lead all NL clubs this spring with a .303 team batting average.

Andre Ethier went 1-for-2 with a double yesterday, raising his batting average to .417 and his slugging percentage to .833 in seven games.

Non-roster hopeful Brian Barden struck out in his only at-bat yesterday, but has posted a .550 batting average (11-for-20) with two doubles and three RBI in 11 games this spring.

CONGRATULATIONS: Congratulations to Dodger Senior Vice President and General Counsel Sam Fernandez on being recognized with the Outstanding Corporate Counsel Award by the Los Angeles County Bar Association. Fernandez will be presented with the award tomorrow night at a dinner at the Millennium Biltmore Hotel in Los Angeles, where Vin Scully will be the keynote speaker. Former Dodger GM Fred Claire will introduce Fernandez at the awards dinner.

THE GANG’S ALL HERE: Today, Dodger minor league position players officially reported to camp, increasing the number of players to 173 on the minor league side. The minor leaguers’ first full-squad workout is tomorrow.
Posted by Roberto Baly at 12:00 PM