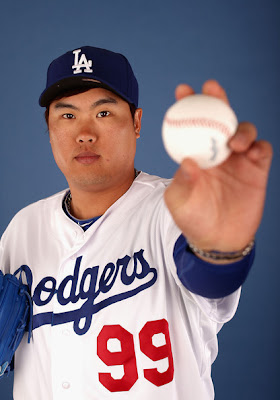 LET’S PLAY TWO!: The Dodgers will play a pair of Cactus League contests today with split-squads playing the Angels in Tempe and the Padres at Camelback Ranch – Glendale. Los Angeles will send an offseason acquisition to the hill in both games with right-hander Zack Greinke making his second start of the spring in Glendale against the Padres and Hyun-Jin Ryu taking the hill in Tempe for his second appearance (first start) as a Dodger. In case you’re counting down the days, the Dodgers are just ONE MONTH away from Opening Day!

Don Mattingly will stay in Glendale, while Triple-A Albuquerque Manager Lorenzo Bundy, the reigning Pacific Coast League Manager of the Year, will skipper the club in Tempe.

It’s hard to believe but only four years ago today, the Dodgers and White Sox played the first-ever game at Camelback Ranch – Glendale in front of 11,280 fans. Los Angeles fell 3-2 in that contest, but drew 131,134 fans to Glendale in 14 games in their inaugural season in the Cactus League.

STREAKING: The Dodgers, unbeaten in their last five games, downed the Angels yesterday at Camelback Ranch, 10-8. Luis Cruz powered his second home run of the spring, a two-run shot in the first inning, while Mark Ellis had two hits and knocked in two. Alfredo Amezaga continued to swing a hot bat with two more hits and is a perfect 5-for-5 with three runs scored and four RBI in his last two games. Clayton Kershaw picked up the win and struck out seven in 3.0 innings of work in his second Cactus League start.

After yesterday’s offensive outburst, the Dodgers are batting .290 with a .395 team on-base percentage this spring.

ZACK ATTACK: In Glendale, Dodger right-hander Zack Greinke will make his second start of the spring after allowing just one hit and striking out two in 2.0 scoreless frames on Sunday against the White Sox. Greinke has made just one start in his career against the Friars, picking up the win on May 9, 2011 with 6.0 innings of two-run ball in the Brewers’ 4-3 win at Miller Park. The 2009 American League Cy Young Award winner ranks fifth in the Majors with 1,007 strikeouts since the start of the 2008 season.

RHP Matt Guerrier, who was limited to just 16 games last season with right elbow tendinitis, will make his second appearance of the spring after striking out two in a scoreless inning on Monday against the Cubs.

RHP Stephen Fife allowed one run in 2.0 innings in his only previous outing on Saturday against the White Sox. The Idaho native made five big league starts for the Dodgers last year (0-2, 2.70 ERA) for his first Major League experience.

Non-roster RHP Kevin Gregg will make his second appearance of the spring after tossing a scoreless inning on Monday against the Cubs. The 10-year Major League veteran spent the 2012 campaign with the Orioles.

K-TOWN: In Tempe, Dodger left-hander Hyun-Jin Ryu will make his first start of the spring this afternoon after firing a scoreless inning in relief on Sunday against the White Sox. In seven seasons pitching for the Hanwha Eagles of the Korea Baseball Organization, Ryu was selected to seven All-Star games, won the strikeout title five times and took home the league’s pitching triple crown in 2006, when he was selected as the circuit’s rookie of the year and player of the year. In his career, Ryu is 98-52 with a 2.80 ERA in 190 games (181 starts).

RHP Matt Palmer will make his second appearance of the spring after firing 2.0 scoreless frames on Sunday against the White Sox. Palmer spent the majority of the 2012 season with Triple-A Tucson, but also made three relief appearances for San Diego during a late May-early June call-up.

RHP Shawn Tolleson last pitched on Monday against the Cubs, striking out two in a scoreless frame. Tolleson, 25, made 40 appearances for Los Angeles last year and limited opponents to a .221 batting average with 39 strikeouts in 37.2 innings.

LHP Paco Rodriguez will make his second appearance of the spring after tossing a scoreless inning on Monday against the Cubs. Rodriguez, the first player from the 2012 First-Year Player Draft to reach the big leagues, allowed just one run in 11 appearances with the Dodgers last season.

THE BISON IS BACK!: Dodger center fielder Matt Kemp is slated to make his 2013 debut this afternoon for the Dodgers as the designated hitter against the Padres. Kemp, who had offseason shoulder surgery, ranks ninth on the Los Angeles Dodgers home run list with 151, three behind Willie Davis for eighth place.

LEGENDS ARRVING: Two Dodger greats, Eric Karros and Shawn Green, arrived in camp today and will be in uniform as guest coaches for the next three days. Green will throw a ceremonial first pitch before today’s game against the Padres and Karros will follow suit on March 3.

HAPPY DAYS: The Dodgers would like to wish non-roster catcher Ramon Castro a happy 37th birthday today! The 13-year Major League veteran has appeared in two games this spring, going 1-for-4.

BE THERE!: The Dodgers ticket sales department will host another Open House Sunday, March 3 in which fans interested in purchasing a Mini Plan or season tickets can stop by Dodger Stadium from 10 a.m. until 3 p.m. Complete details on this event can be found by visiting www.dodgers.com/openhouse. Dodger season tickets start at just $6 per game.

While there, fans can check out the construction of the Dodgers’ new scoreboards. Yesterday, ANC announced details of the displays, which are designed in the historic hexagonal shape of the stadium’s original scoreboard and will feature a total active viewing area of approximately 2488 square feet. The scoreboards will feature the highest pixel densities in Major League Baseball.
Posted by Roberto Baly at 11:30 AM