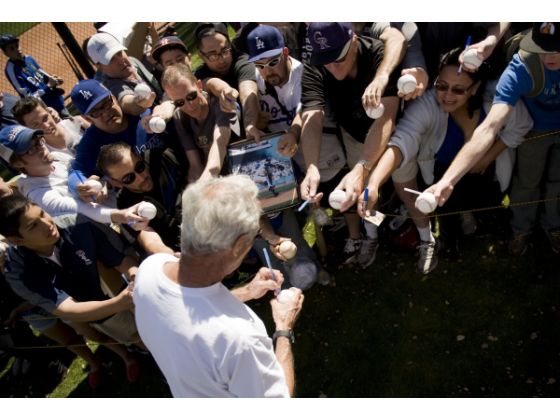 My friend called me earlier to tell me if I have seen this picture of Sandy Koufax at Camelback Ranch (During my trip last month) that shows my mother- in-law (wearing glasses, blue blouse, grey sweater) trying to get a autograph for me while being shoved around by all of these men that look like they are after Kate Upton instead of Koufax. It was posted by the O.C. Register.

I hadn't seen the picture. I've been looking everywhere to see if I would show up in any pictures since I was close to Koufax on two occasions but I didn't find anything.

If you recall, I did get one autograph from Koufax. I tried to get another one after practice but I was unsuccessful. My mother-in-law tried twice and both times Koufax rejected her. She was upset. It was the funniest thing ever because the autograph is not even for her. It was for me. But I guess because she was trying to help me, she felt bad. She also doesn't understand how she was so close to him (and in the front!) and both times, Koufax didn't grab her item.

It's just about being lucky. Koufax would pick something quickly. I noticed he would do one and then skip one or two fans and then get another item. He wasn't going to sign for everyone. That would take hours.

I did laugh when I saw this picture. It's just great. I emailed her this picture and she also laughed.

Thanks Ron for the picture.

By the way, I'm in this picture too. In the back looking a bit suspicious. (Blue Dodger jacket and hat)
Posted by Roberto Baly at 9:00 PM

What's most sad about this photo is that probably 90% of that stuff ended up on ebay. I wish sometimes real collectors got first crack at these things. You have one amazing Mother in Law man.