Mike Piazza blames Vin Scully for turning fans against him 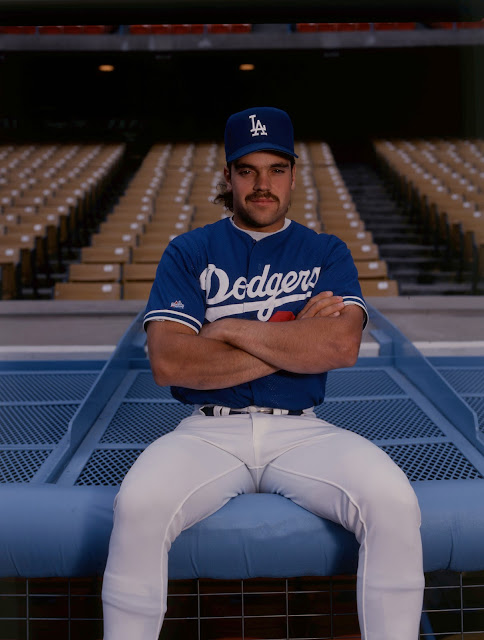 Mike Piazza has not set foot in Dodger Stadium since his retirement. When the Dodgers offered to honor him with a bobblehead night last season, Piazza declined.

"He doesn't want to come back because he thinks the fans will boo," former Dodgers Manager Tom Lasorda, the godfather to Piazza's brother, told The Times last month.

Piazza did himself no favors on that score in his new book, "Long Shot." In the book, he blames iconic Dodgers broadcaster Vin Scully for turning fans against him during the contract stalemate that preceded his trade to the Florida Marlins in 1998.

Piazza, who was eligible for free agency after the 1998 season, said he hoped to stay with the Dodgers but set a deadline of Feb. 15 to reach a new contract. In the book, Piazza wrote that Scully asked him about the deadline in a spring interview.

"He wasn't happy about it," Piazza wrote. "And Scully's voice carried a great deal of authority in Los Angeles."

Piazza wanted $105 million over seven years. In the book, he said the Dodgers made a take-it-or-leave-it offer of $76 million over six years, said he would have signed at $79 million, and suggested the team leaked that it had offered $80 million.

At $80 million -- or even at $76 million -- Piazza would have been the highest-paid player in the game. Dodgers fans took notice that spring, as Piazza wrote.

"The way the whole contract drama looked to them -- many of whom were taking their cue from Scully -- was that, by setting a deadline and insisting on so much money, I was demonstrating a conspicuous lack of loyalty to the ball club," Piazza wrote. "I understood that."

Piazza ripped the Dodgers in a 1998 opening day interview with The Times. In the book, he said that interview did not play well with the L.A. fans, and neither did the fact that he failed to drive in a run as the Dodgers opened the season with a four-game losing streak.

"On top of that, Vin Scully was crushing me," Piazza wrote.

"That's not true at all," Scully told The Times in a telephone interview Wednesday.

Scully said he could not recall the interview in which Piazza said the contract deadline was discussed. However, Scully said, he never would criticize a player about contractual negotiations.

"As God is my judge, I don't get involved in these things," Scully said. "I can't imagine I would ever put my toe in the water as far as a player and his negotiations.

"I have no idea where he is coming from. I really have no idea. I can't imagine saying something about a player and his contract. I just don't do that, ever. I'm really flabbergasted by that reference."

Have you ever heard Vin Scully talk about contracts and what not? Poor Scully. He sounds hurt.

I remember when he was booed when he came back to Dodger Stadium as a New York Met. I didn't boo. In my opinion he deserved the money and thought Fox made a terrible mistake in trading him. I never understood why the fans booed him. Plus Scully didn't have anything to do what the fans were doing.

I think Piazza screwed up now with these comments. I would be surprised if the Dodgers and Piazza ever get together for any type of event now. If he doesn't want a bobblehead then so be it.

This is disappointing for me because I'm a huge Piazza fan. He was my favorite player growing up. And it's funny that I liked him so much as a kid even though the times that I met him, I always thought he was mean.
Posted by Roberto Baly at 2:00 PM

And this is why Piazza is not worthy of doing anything with the dodgers. It was always about $$ for him - to blame Vin, the voice and soul of the dodgers is a complete travesty. I will not buy his book and will for sure not support him in the HOF. Let him go in as a met, he doesn't deserve to wear blue.

This sound slike it is coming "out of leftfield" (shameless pun)

You don't bad mouth Vin. I don't care who you are. He has been a class act his entire career. I'm sure I've missed something somewhere, but I have NEVER heard a negative comment from Vin about any of the players.

Vin Scully is a Class Act. Piazza just showed that he is Not !! I will not read that book. I don't care if he ever comes back to Dodger Stadium !!

Wow, sour grapes from Piazza. It is sad because he was an awesome ballplayer. Blaming things on Vin is not classy. Vin is the consummate sportscaster. I guess I will wait to read his book when I find it in the used book section of my library! ;)

Like I have said many times before, I don't understand why certain Dodgers fans continue to worship Mike. Piazza was my favorite Dodger growing up, but the guy decided to burn some bridges and blamed everyone but himself for it. It would be one thing if he felt that way back in 98 and decided to let it go, but he continues to spit on Dodgers fans even after we wanted to honor him with a bobblehead.

Some Dodgers fans will continue to defend this guy and that's fine, but at least now people can't continue to deny that Piazza still hates us. I have said it once and I'll say it again; If i'm dead to Piazza being a Dodgers fan, then he is dead to me. That is unless I need his auto for ebay, because as a Dodgers fan that's what his autograph is worth to me.

Vinny > Than any player, manager, or announcer alive.

Always has been, always will be. You burn that bridge, and you are asking to be the bad guy. End of story.

How pitiful...I just lost respect for Piazza...I know that the trade was wrong and awful, but Vin had nothing to do with it...and even if he had, I agree with @tosler--Vin Scully is a class act!

Vin Scully is a classy man! Piazza is an idiot who only cares about money and his fame! He said the Dodgers offered $76 million but he wanted $79 million...that rite there tells you he only cared about the money and not about having a legacy with the Dodgers!

Piazza was a favorite of mine when he played for the Dodgers in the 90's but I lost all respect for the man after these comments he made against Vin. Next thing you know he is going to say Vin paid Roger Clemens to bean him. Thanks for the memories Mike but your relationship with the Dodgers is over!!!!!

A lot of posters are referring to how Classy Vin Scully is, in order to contrast the perceived lack of class of Piazza - and it's wrong. It's apples and oranges. Piazza is just sharing his personal feelings on what he experienced. FOR HIM, the impact of Scully's words resonated with him. Scully by asking the question DID stir the pot, and DID drive some fans to start questioning Piazza. When someone as important to the Dodgers as Scully simply asks a question - especially about loyalty and money, it opens the door for other reporters to begin piling on. So, no Scully is fully responsible, but YES, he did add to it, and because of his relationship to the Dodgers, that is what is probably most disappointing to Piazza.

Vin Scully is an overated boring egotistic has been. With the Extra Innings package I like watching West coast games but to listen to Scully, who insists on being alone, is crying for help from his outdated boring commentary. Announcers like him had their day. He is similar to when the Mets had Ralph Kiner for so long. Maybe the new ownership will realized it time to enter the 21st century and just a little excitement. Can't blame Piazza for not returning to Dodger Stadium. Why show up there where he undeserving will publicly be unappreciated by Dodger fans who choose to remember a contract negotiation and further enticed by "So beloved Scully". He knows who appreciates and loves him... NY MET FANS! If the HOF tried to make Piazza go in as a Dodger II think he would smash "the bust" and boycott the ceremony. PIAZZA = METS