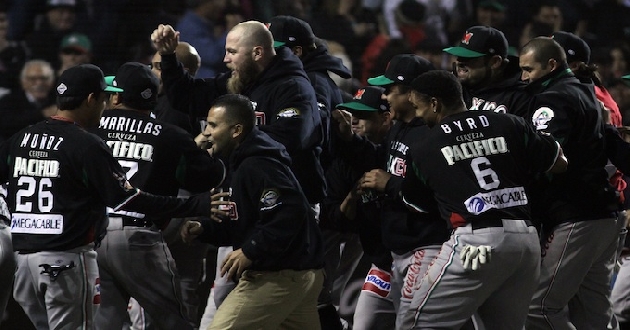 It was a fantastic 'Serie del Caribe'. Last night was the championship game between Mexico and the Dominican Republic. It went all the way to the 18th inning as Mexico defeated the Dominicans 4-3. {Box score}

Here's a 13 minute video of highlights. If you fast-forward to 6 minutes you will see Hanley Ramirez hurting his knee by sliding into 2nd base in the 14th inning when trying to break up a double play. By the way, why bunt? See it all in this video. -

Ramirez apparently didn't suffer a major injury since he stayed in the game. It was a terrible series for Ramirez. He went 1-8 last night and batted .156 in the entire series.

Twitter went crazy last night when Ramirez went down in pain. Most asking why is he playing. What's more important? This or the regular season? The funny thing is that he didn't have to play in the 'Serie del Caribe'. Let me explain.

Ramirez played winter ball in the Dominican Republic for the Tigres del Licey. They got eliminated in mid-December and Leones de Escogido won it all last month and represented the Dominican Republic for the 'Serie del Caribe'. The general manager for the Leones is former MLB player Moises Alou. When going to the 'Serie del Caribe', you're allowed to change the roster and get players from other teams to get it stronger. He invited Ramirez to join the team and he accepted it.

Players from Dominican Republic, Mexico, Venezuela and Puerto Rico feel a lot of pressure to play. They feel it's mandatory to represent your country. That's not the way it is here in the USA. You don't see many All-Stars say "I want to play for Team USA in the World Baseball Classic".

I'm not saying it's right but that's the way it is for Latin players. If the Dodgers were worried about Ramirez getting hurt then they should have told him that he cannot play. When Ramirez was in the Marlins organization, he played winter ball from 2003 to 2007. The Marlins did not allow him to play anymore after '07.

Ramirez gets traded to the Dodgers and he gets another opportunity to play winter ball because Don Mattingly and Ned Colletti allowed it. Don't blame Ramirez for wanting to play. Blame the Dodgers.

"It's all about representing the Dominican Republic," he said in Spanish. "I give everything for my country. You see a lot of players here in Mexico do the same. That's a beautiful thing, when you sport your flag and your country across your chest."

Oh, and he's planning to play in the upcoming World Baseball Classic. Don Mattingly said the following in the same article -

"It's really hard to say, 'Don't play for your country,'" Dodgers manager Don Mattingly said at a charity event this offseason. "I'm kind of torn. Selfishly, I'd like Hanley to be in camp playing short every day." 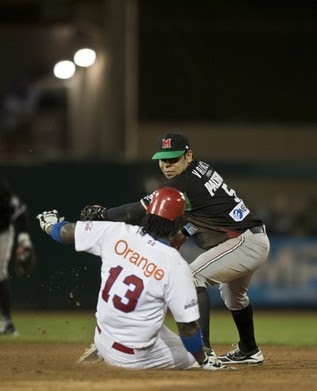 Ramirez is a free agent after the 2014 season. Who knows where he will be playing in a few years but we do know that he will continue to play in international events. He tells a Dominican newspaper yesterday that he wants to represent his country all the time.

I want to follow the steps of Miguel Tejada, he's a great example inside and outside the field.I want to be like him and represent my country and do it honorably.

I've always said it, everything for my country

It will be interesting to see what the Dodgers do next off-season with Ramirez. Allow him to play or tell him to rest.

Even for this upcoming WBC,  can the Dodgers just tell him "Never mind, we need you in camp everyday".

Once again, congratulations to Mexico. One of the best games I have ever seen on TV. Even though I only slept 3 hours, it was worth it.
Posted by Roberto Baly at 7:30 AM