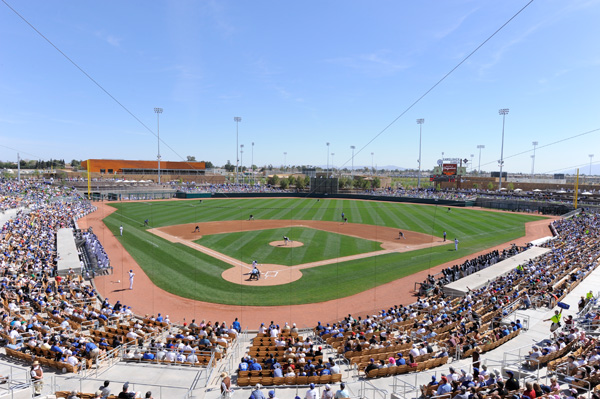 Ready to go to Arizona?

The Dodgers sent out a press release last Friday with some great Spring Training info. I posted the roster and non-roster invitees already. {linked here}

THE FACILITY:  The Dodgers’ complex at Camelback Ranch – Glendale includes six practice fields as well as the stadium. The award-winning facility, which the Dodgers share with the Chicago White Sox, includes a total of more than 118,000 square feet of Major and Minor League clubhouse space, 13 full baseball fields and three half-fields. The site also features picturesque walking trails, landscaped grounds, an orange grove, two ponds and a lake.

DESERT HOME:  2013 is the fifth year the Dodgers will play their Spring Training home games at Camelback Ranch - Glendale. In the club’s inaugural season at the award-winning facility in 2009, the Dodgers set a franchise attendance mark by hosting 131,134 fans throughout the season. The average game attendance mark of 9,367 from 2009 is also a franchise record. Last season the Dodgers hosted more than 120,000 fans at Camelback. Dodgers have played in four of the top five highest attended Cactus League games. 13,655 fans attended the March 17, 2012 game between the Giants and the Dodgers at Camelback Ranch, which ranks as the most-attended game in Cactus league history.

AWARDS AND ACCOLADES:  Following the 2010 season, Camelback Ranch – Glendale received the 2010 Facility of Merit Award from Athletic Business Magazine and the Best of the West Award from WESTMARC, a coalition of West Maricopa County businesses. In 2009, the facility received the Editor’s Choice Award from BallparkDigest.com for “significantly advancing the state of the art for spring training complexes” and the Best of 2009 Award from the Phoenix New Times recognizing CR-G as the “Best Place to See A Spring Training Game, New School.”

2013 SPRING SCHEDULE:  The Dodgers will open their Spring Training schedule on Saturday, February 23 as the home team in a game against the Chicago White Sox at Camelback Ranch – Glendale. Their first away game is the following day, as they take on the White Sox on February 24. The Dodgers will play a total of 19 games at Camelback Ranch this spring and during each of the five Spring Training weekends, providing fans ample opportunity to make the five-hour drive or one-hour flight to the desert.

TUCSON:  The Los Angeles Dodgers and Chicago Cubs along with the Pima County Sports and Tourism Authority and the Tucson Padres will play a Spring Training contest in Tucson with all proceeds going to the Christina-Taylor Green Memorial Foundation. The game will be held at Kino Veterans Memorial Stadium on Thursday, March 21, at 1:05 p.m. The Dodgers and White Sox are committed to supporting the Tucson community by helping raise funds for the victims and families affected by the events of January 8, 2011. This will mark the Dodgers’ third annual benefit game in Tucson dating to 2011.

SPRING TICKETS:  Tickets for the Dodgers’ Cactus League schedule at Camelback Ranch – Glendale are available at www.dodgers.com/spring or by calling (623) 302-5000. Single-game ticket prices begin at $8 ($13 premier games) and all tickets for the Dodgers’ first three games at Camelback (excluding “All You Can Eat” tickets and suites) are half price. Baseline reserved seats are now available for an advanced price of $10, previously $15, and baseline field box seat prices have dropped from $28 to an advance price of $19. More information about Spring Training, including the Camelback Ranch promotional schedule and full ticket pricing information, is available at www.camelbackranchbaseball.com.

EXHIBITION GAMES:  The Los Angeles Dodgers and Los Angeles Angels of Anaheim will play three Freeway Series exhibition games in Southern California before the regular season begins. The Dodgers will send a split squad to Angel Stadium on Monday, March 28 at 7:05 p.m. and will also field a split squad, managed by Hall of Famer Tommy Lasorda, to play a seven-inning exhibition against Class A affiliate Rancho Cucamonga at the Epicenter in Cucamonga, Calif. at 6:05 p.m. The Dodgers return home to host the Angels at Dodger Stadium on Friday, March 29 at 7:10 p.m. and conclude their spring training schedule in Anaheim on Saturday March 30 at 6:05 p.m..

Click here for the schedule.
Posted by Roberto Baly at 4:00 PM

thanx for the info. do u know what time gates open, and where's a good spot for autos

Hi Orlando, gates open at 9am. Once inside you will see the yellow ropes where the players walk around. You can hang out there!