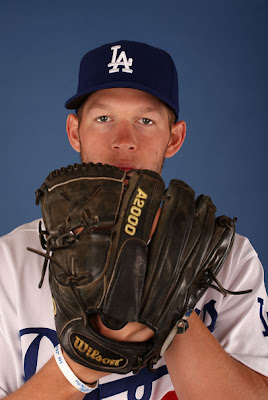 Spring Training notes from the Dodgers -

START A STREAK: Fresh off a road victory, the Dodgers host the Angels this afternoon at Camelback Ranch, before sending a split squad to Tempe tomorrow and wrapping up a two-game Cactus League set with their I-5 neighbors. The Freeway series will then take place from March 28-30, including the 2013 Dodger Stadium opener on March 29. The Dodgers face the Angels in the regular season on May 27 and 28 at Dodger Stadium and May 29 and 30 at Angel Stadium. Last season, the Halos went 4-2 against the Boys in Blue, taking two of three in both series. In case you were wondering and I know you were, there are just 32 days until Opening Day!

The Dodgers popped off for 11 runs yesterday, including three hits apiece for Alfredo Amezaga and Elian Herrera and three RBI for Jerry Hairston Jr. In addition, outfielder Alex Castellanos belted his second home run of the spring and Yasiel Puig scored three runs. On the mound, Matt Magill was impressive again, tossing 2.0 scoreless innings while RHP Javy Guerra made his 2013 debut with a scoreless frame.

HILLTOPPERS: Dodger ace Clayton Kershaw will make his second Cactus League start after allowing two runs and four hits in 2.0 innings to the White Sox last Saturday. The left-hander will attempt to become the first pitcher to win three consecutive Major League ERA titles since Greg Maddux accomplished the feat from 1993-95 as a member of the Braves.

LHP Ted Lilly is set to make his 2013 debut today. Lilly won five of his first seven starts without a loss last season, but did not pitch again due to left shoulder inflammation after suffering his first defeat on May 23.

RHP Peter Moylan will make his second spring appearance after giving up two runs in 0.2 innings last Sunday vs. the Chicago White Sox. Moylan has a career record of 20-9 with a 2.59 ERA over 295 games with the Atlanta Braves.

RHP Josh Wall will also make his second Cactus League appearance after firing 1.1 scoreless innings and striking out two in his debut last Sunday. Wall picked up the win in his Major League debut last season on July 22 at Citi Field, but was optioned to Triple-A Albuquerque the next day.

GET YOUR BIG LEAGUE ON: The Dodgers will have three minor leaguers joining the club vs. the Angels today with right-handed pitchers Andres Santiago (#92) and Blake Johnson  (#83) coming over along with LHP Fabio Castro (#82). Johnson notched a save in the Dodgers’ first win of the spring after being signed out of the open tryout in 2012.

Speaking of the open tryout, more than 80 Dodger hopefuls came out to test their wares on the minor league side this morning. Among those who showed off for the Dodger scouts were a 54-year-old local pitcher, a 40+-year-old Japanese professional hurler and Iraq war veteran Daniel “Doc” Jacobs, who lost his left leg below the knee and suffered serious hand and foot injuries when an IED exploded beneath him in 2006. Jacobs has sustained more than 50 surgeries, but has returned to his naval infantry and for one day at least was able to try out for the Los Angeles Dodgers. Jacobs will also throw out a ceremonial first pitch prior to today’s game.

LET’S GET IT GOING DODGER FANS!: Dodger center fielder Matt Kemp advanced to the finals of MLB Network’s #FaceofMLB and is currently trailing Cincinnati’s Joey Votto in MLB Network’s bracket to decide who the Face of MLB is. The online hashtag battle (#MattKemp) runs through tomorrow. Start tweeting!

LEGENDS ARRVING: The Dodgers would like to welcome Special Advisor to the Chairman and medical pioneer Dr. Frank Jobe to Camelback Ranch today. Jobe arrived a day before Eric Karros, who will be in uniform tomorrow, speaking to the club in the morning meeting.

HE COMES FROM A LAND DOWN UNDER: The Dodgers would like to welcome former outfielder Trent Oeltjen back to Camelback Ranch today. The Sydney, Australia native was a Dodger from 2010-12 and is now a non-roster invitee for the Angels.

WORTH WATCHING: Today’s game will be broadcast live on PRIME TICKET and heard on AM 570 Fox Sports Los Angeles. This morning, Hall of Fame broadcaster Vin Scully sat down with legendary Hall of Fame pitcher Sandy Koufax for a brief interview that will air on PRIME TICKET this afternoon.
Posted by Roberto Baly at 12:00 PM