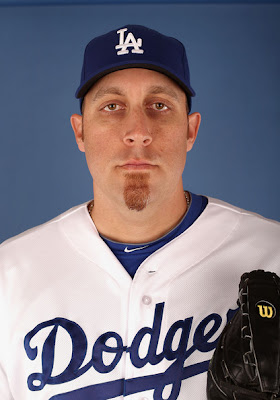 HIT THE ROAD!: The Dodgers travel to Mesa today for their first true road game of the spring as they meet the Cubs for the second time in three days after Los Angeles’ 7-6 win on Monday at Camelback Ranch. After today, the clubs will meet two more times this spring and then seven times during the regular season, Aug. 1-4, at Wrigley Field and Aug. 26-28 at Dodger Stadium. Los Angeles won the season series, 4-2, last season and according to the Elias Sports Bureau, the Dodgers hold a slim, 1,028-1,023-14, advantage in the franchises’ 2,065 all-time meetings. In case you were wondering and I know you were, there are just 33 days until Opening Day!

The Giants rallied for four runs in the ninth inning yesterday to tie the Dodgers, 8-8. Los Angeles batted around during a five-run second inning that knocked Tim Lincecum out of the game and also plated three runs in the sixth inning on Alex Castellanos’ three-run homer. Skip Schumaker and non-roster hopeful Jeremy Moore both hit two-run doubles during the club’s second-inning rally with Moore going 2-for-2 with two doubles, a run scored and two RBI on the afternoon. On the mound, Josh Beckett threw 27 pitches and struck out three in 2.0 scoreless frames in his first start of the spring.

HILLTOPPERS: Aaron Harang will make his 2013 debut this afternoon after going 10-10 with a career-best 3.61 ERA in 31 starts last season with the Dodgers. Harang made just one start against the Cubs last year and did not factor in the decision despite allowing just two runs in 6.0 innings in an eventual 4-3 Dodger loss on May 6 at Wrigley Field. In his career, the 35-year-old right-hander has thrown more innings against the Cubs than any other big league club (165.2 IP), going 11-8 with a 4.40 ERA in 26 starts against Chicago.

RHP Ronald Belisario is expected to make his second appearance of the spring this afternoon after allowing two runs on three hits in 1.0 inning on Saturday against the White Sox. Belisario did not allow a hit or a run in three appearances against the Cubs last season, walking one and striking out four in 3.0 frames.

RHP Mark Lowe tossed a scoreless inning on Saturday against the White Sox and will be making his second appearance of the spring. Lowe, a seven-year big league veteran, is in his first season with Los Angeles after two-plus years with the Rangers.

RHP Javy Guerra will make his 2013 debut today after having his 2012 season cut short by an oblique injury. Guerra has been successful in 29 of 36 save opportunities in his career and his 2.45 ERA is the 15th lowest mark among NL relievers during the past two seasons.

RHP Matt Magill enters the season rated as the Dodgers’ No. 9 prospect by Baseball America and will make his second appearance of the spring after striking out three in 1.1 scoreless frames on Saturday against the White Sox. Magill was a 2012 Double-A Southern League All-Star and was honored as the league’s pitcher of the week on three occasions last year, going 11-8 with a 3.75 ERA in 26 starts for Chattanooga.

LET’S GET IT GOING DODGER FANS!: Dodger center fielder Matt Kemp advanced to the finals of MLB Network’s #FaceofMLB and is currently trailing Cincinnati’s Joey Votto in MLB Network’s bracket to decide who the Face of MLB is. The online hashtag battle (#MattKemp) runs through Friday. Start tweeting!

LACE ‘EM UP: Tomorrow morning is the Dodgers’ annual open tryout in which any ballplayer can come to the fields and attempt to earn a minor league contract. Registration will begin promptly at 8 a.m. with the tryout taking place at 9 a.m. on the minor league back fields. Players just have to bring their own uniform and then dazzle the staff.

MAJORING IN THE MINORS: The Dodgers will have six minor leaguers joining the club in Mesa today with outfielder Matt Angle (#82), infielders Rafael Ynoa (#83) and Rusty Ryal (#84) and pitchers RHP Angel Sanchez (#87), LHP Eric Eadington (#88) and RHP Red Patterson (#89). Today will be a homecoming of sorts for Eadington, Patterson and Ynoa, who played in Mesa during their stints last fall in the Arizona Fall League. Ynoa, 25, led the Solar Sox with a .330 batting average, 32 hits, four triples, 20 RBI in 27 games.

WORTH WATCHING: Today’s game will not be televised or on the radio in Los Angeles, but tomorrow’s 1:05 pm game (12:05 pm PT) can be seen on PRIME TICKET and heard on AM 570 Fox Sports Los Angeles. During tomorrow’s telecast, an excerpt of a special interview will air featuring a pair of Hall of Famers, Vin Scully and Sandy Koufax.

Yesterday, team photographer Jon SooHoo shot a once-in-a-lifetime photo with legendary Dodgers Maury Wills and Sandy Koufax, Hall of Fame broadcasters Vin Scully and Jaime Jarrin, Hall of Fame Manager Tommy Lasorda and Team Travel Advisor Billy Delury that represented more than three hundred combined years of service to the club. That photo along with SooHoo’s daily photo galleries can be viewed on Dodgers.com.
Posted by Roberto Baly at 11:00 AM