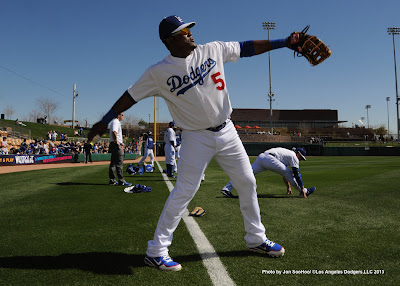 
JUST A SNEAK PEAK: The Dodgers and Giants square off this afternoon in the first of two Cactus League meetings this spring with the other coming on March 8 in Scottsdale as part of a split-squad tussle. Those two games are just a couple of appetizers, however, as the main course will be when the Giants visit Los Angeles on April 1 in the Dodgers’ 56th home opener in L.A. In case you were wondering and I know you were, there are just 34 days until Opening Day!

The Dodgers came from behind and beat the Cubs 7-6 yesterday as Omar Luna’s eighth-inning single plated Nick Evans with the eventual game-winning run. Paco Rodriguez worked out of a jam in the eighth inning to record his first-ever Cactus League win and minor leaguer Blake Johnson notched a save by working a scoreless ninth.

The Dodgers will send right-hander Josh Beckett to the mound today against Tim Lincecum. Following Beckett to the hill in their spring debuts this afternoon will be RHP Brandon League, RHP Kenley Jansen and LHP J.P. Howell. RHP Gregory Infante will make is scheduled to make his second Cactus League appearance.

THE OTHER BIG TEXAN: Former World Series and ALCS MVP Josh Beckett will make his 2013 debut this afternoon. Beckett went 2-3 with a 2.93 ERA in seven starts with Los Angeles last season after coming over in an Aug. 25 trade with Boston. The right-hander made one start against the Giants, allowing four runs in 6.1 innings last Sept. 7 in San Francisco .Beckett posted a 2.65 ERA (11 ER/37.1 IP) in September and went 3-4 with a 2.97 ERA in nine combined starts against NL opponents last season. Since 2005, Beckett’s 106 victories rank sixth in the Major Leagues over that time, trailing just C.C. Sabathia (137), Roy Halladay (132), Justin Verlander (124), Dan Haren (113) and Cliff Lee (108).

TIME TO DIG THE LONG BALL: Through three games, the Dodgers have just one home run, courtesy of Luis Cruz, who belted one on Sunday. Today’s starting lineup combined for 85 homers in 2013, led by Hanley Ramirez’s 24.

Cruz was a late scratch and was sent home due to the stomach flu. He was replaced in the lineup by DH Tim Federowicz and Juan Uribe will move to third base.

OLD FRIENDS: Former Dodgers Scott Proctor and Wilson Valdez are on the Giants’ travel squad today. Proctor and Valdez were teammates in blue on the 2007 Dodgers, after Proctor was a trade deadline acquisition and Valdez was recalled in September.

Today’s starting third baseman for the Dodgers is Juan Uribe, who played in San Francisco from 2009-10, driving in nine postseason runs on the way to helping the Giants win their first World Series in the Bay Area. Uribe started at first base yesterday and played 3.0 innings, going 0-for-2. On Saturday, his line-drive single was the first Cactus League hit for Los Angeles.

LET’S GET IT GOING DODGER FANS!: Dodger center fielder Matt Kemp advanced to the finals of MLB Network’s #FaceofMLB and is currently trailing Cincinnati’s Joey Votto in MLB Network’s bracket to decide who the Face of MLB is. The online hashtag battle (#MattKemp) runs through Friday. Start tweeting!

RADIO FLYERS: Today’s 1:05 p.m. (12:05 p.m. PT) game will be called by Charley Steiner and Rick Monday and can be heard on AM 570 Fox Sports Los Angeles, which will also feature Dodger Talk with Kevin Kennedy, David Vassegh and Jorge Jarrin tonight at 7:00 p.m. PT.

ADMIRING THE SCENERY: If you have been to the Camelback Ranch Major League building over the years, it will be easy to notice a few changes to the interior that jump out at you in 2013. In addition to the blue paint that now adorns most of the office walls, framed pictures of past Dodger yearbooks, media guides and Sports Illustrated covers now hang in the building. In Dodger manager Don Mattingly’s office,  framed black and white photos of each Dodger skipper in franchise history rests over the couch. Today, Hall of Fame broadcaster Vin Scully stopped by to see Mattingly and Dodger GM Ned Colletti, spinning yarns about rooming with Leo Durocher in Vero Beach, Burt Shotton’s suits and Charlie Dressen’s perfect attendance at church.
Posted by Roberto Baly at 12:00 PM