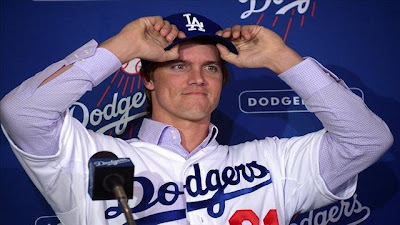 BACK AT IT: Following their 9-0 defeat at the hands of the White Sox in the Cactus League lid-lifter yesterday, the Dodgers will tussle again with the Sox this afternoon at Camelback Ranch - Glendale in their first official “road” game of the spring. Today marks the highly anticipated Dodger debut of two starters as free agent acquisition Zack Greinke and Korean sensation Hyun-Jin Ryu will be the first two hurlers out of the shoot today for Don Mattingly’s club. Greinke and Ryu will be followed to the mound this afternoon by RHP Peter Moylan, RHP Josh Wall, RHP Steve Ames and RHP Matt Palmer. In case you were wondering, there are 36 days until Opening Day!

*         Right-handed minor league pitchers Angel Castro (No. 88) and Blake Johnson (No. 82) will be available to pitch today, sliding over from the other side of the complex.

ZACK ATTACK: Today, Dodger starter Zack Greinke will don Dodger blue in a game for the first time. Greinke, who won the 2009 American League Cy Young Award, signed a six-year contract with Los Angeles in December. The 29-year-old, who will enter his 10th Major League season, has a 91-78 career record with a 3.77 ERA while posting double-digit wins over the last five consecutive seasons.

*         The “other” big offseason signing, Hyun-Jin Ryu, will also be making his competitive Dodger debut. The seven-time Korea Baseball Organization All-Star and five-time KBO strikeout leader signed a six-year deal with the Dodgers after being posted by the Hanwha Eagles. The 25-year-old left-hander has a 98-52 record and a 2.80 ERA in 190 career games as a professional in Korea.

YOUTH IS SERVED: Three Dodgers in the starting lineup today are 26 years old or younger as Yasiel Puig (22, DH), Tim Federowicz (25, C), Jeremy Moore (25, LF) and Alex Castellanos (26, CF) all make their first spring starts today. Puig went 1-for-2 with a double in his Cactus League debut yesterday. Of the four, Castellanos has the most big league experience of the foursome, despite playing in just 16 games with Los Angeles last season. The Miami native belted his first Major League home run in the Dodgers’ final game of the season last year, ripping a solo shot off San Francisco’s Jean Machi on October 3.

GIMME SOME MOORE: Starting in left field today will be 25-year old non-roster invitee Jeremy Moore, who was originally selected by the Angels in the sixth round of the 2005 First-Year Player Draft. Moore didn’t play at all last season due to a left hip injury and has appeared in just eight big league games, all with the Halos in 2011. The Louisiana native led the Pacific Coast League with 18 triples in 2011, becoming just the second PCL player in history with double-digit stolen bases (21), doubles (24), homers (15) and triples. Moore owns a career average of .277 with 75 homers, 327 RBI and 124 steals in seven minor league seasons.

TODAY ON THE DIAL: KTNQ 1020 AM (Spanish) TODAY ON THE TUBE: None THE TOUR CONTINUES...: Tomorrow, MLB Network will descend on Camelback Ranch for their annual 30 clubs in 30 Days tour. Eric Byrnes will be onsite talking to numerous Dodgers, including fellow outfielder Andre Ethier. The network will also conduct a live interview with Dodger General Manager Ned Colletti at 10:30 A.M. Arizona time.

YOU SEE THIS FACE?: Dodger center fielder Matt Kemp advanced to the finals of MLB Network’s #FaceofMLB contest on Twitter by defeating Atlanta’s Jason Heyward in a vote. In next week’s finals, which will run from tomorrow through Friday, Kemp will face off with Cincinnati’s Joey Votto in MLB Network’s bracket to decide who the Face of MLB is. The current bracket matchups can be viewed here.
Posted by Roberto Baly at 11:00 AM