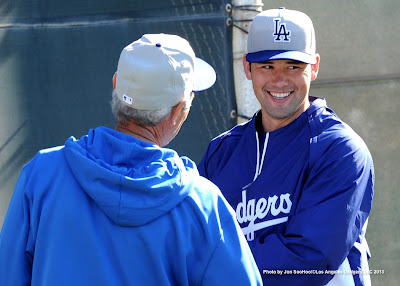 The club will play 36 games in Arizona before playing its final four exhibition games in the greater Los Angeles area against the Angels and Single-A Rancho Cucamonga.

The Spring Training edition of Dodgers Magazine will debut tomorrow at Camelback Ranch and features the heart of the Dodger lineup on the cover; Matt Kemp, Adrian Gonzalez, Hanley Ramirez and Andre Ethier. For those unable to pick one up in Glendale, magazines are also available online at Dodgers.com/magazine.

THIS IS GETTING REAL: Tomorrow is Opening Day at Camelback Ranch with the Dodgers taking on the White Sox for the first of three times during the Cactus League slate. Clayton Kershaw, the 2012 MLB ERA champ, will take the hill for Los Angeles against Chicago right-hander Dylan Axelrod, with RHP Mark Lowe, RHP Ronald Belisario, RHP Stephen Fife, RHP Matt Magill, LHP Kelvin De La Cruz and RHP Gregory Infante expected in relief.

The Dodgers have played the White Sox in four of the last five years during Interleague Play with Chicago holding a 7-5 advantage in the series.

COULD BE LEGENDARY: Dodger alumni Ron Cey, Tim Leary, Fernando Valenzuela, Maury Wills and Steve Yeager will help celebrate a new season of Cactus League play at Camelback Ranch - Glendale’s inaugural Legends Weekend. Former greats from both the Dodgers (tomorrow) and White Sox (Sunday) franchises will be on hand to sign autographs and greet fans from 11:30 am-12:30 pm before being introduced in pregame ceremonies.

CLASSIC BASEBALL: Yesterday, the final rosters were submitted for the 2013 World Baseball Classic with the Dodgers well represented in the once-every-four-year event with Adrian Gonzalez and Luis Cruz playing for Team Mexico, Hanley Ramirez for the Dominican Republic, Ronald Belisario for Venezuela and Nick Punto for Italy. In addition, former Dodger skipper Joe Torre will pilot the U.S. squad. Players will leave camp on or near March 1 with pool play for the World Baseball Classic beginning on March 2 in Taiwan and Japan and on March 7 in Pools C and D in Puerto Rico and Arizona.

Three places that Tommy Lasorda is likely to be found: Bucca di Beppo, Grimaldi’s and now the visiting clubhouse at Camelback Ranch, ever since it became occupied by Team Italy. The Italians will be here working out until March 5, when Team Mexico moves in prior to their exhibition game on Wednesday, March 6 at Camelback Ranch.

Charley Steiner will be calling the Pool D games in Phoenix for MLB International, featuring the United States, Mexico, Canada and Italy. Steiner will call the first of 16 Spring Training games on AM 570 Fox Sports Los Angeles tomorrow alongside Rick Monday, while Jaime Jarrin, Fernando Valenzuela and Pepe Yniguez can be heard in Spanish tomorrow on KTNQ 1020 AM.

YOU SEE THIS FACE?: Dodger center fielder Matt Kemp advanced to the finals of MLB Network’s #FaceofMLB contest on Twitter by defeating Atlanta’s Jason Heyward in yesterday’s vote. In tomorrow’s finals, Kemp will face the winner of today’s semifinal matchup of Andrew McCutchen and Joey Votto in MLB Network’s bracket to decide who is the Face of MLB. The current bracket matchups can be viewed here.
Posted by Roberto Baly at 4:00 PM