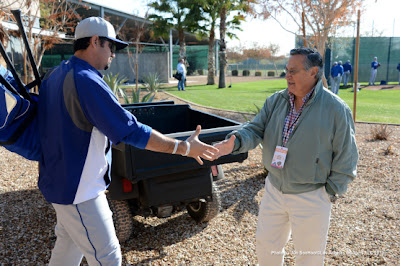 IT’S GETTING CLOSER...: The Dodgers went through their sixth full-squad workout today, stressing team defense in addition to the regular round of batting practice and side sessions. Right-handed hurlers Josh Beckett, Kevin Gregg, Matt Guerrier, Brandon League and Shawn Tolleson tossed live batting practice along with southpaw J.P. Howell on Fields 1 and 2.

Once again, the Dodgers’ inaugural doubles ping-pong tournament raged on and today rare footage of the battles were captured and will be sent to ESPN’s SportsNation.

WELCOME MATT: Today the Dodgers announced that catcher Matt Wallach was invited to big league camp, replacing Eliezer Alfonzo, who missed the start of camp due to a family issue and subsequently contracted Dengue fever. This is Wallach’s second consecutive non-roster invite to Major League camp and last year he hit .232 with four homers and 17 RBI in 59 games for Double-A Chattanooga. The California native turned 27 on Sunday.

CLASSIC BASEBALL: The 2013 World Baseball Classic is right around the corner as most players taking part will leave camp about March 1. The Dodgers will be well represented in the once-every-four-year event with Adrian Gonzalez and Luis Cruz playing for Team Mexico, Hanley Ramirez for the Dominican Republic, Ronald Belisario for Venezuela and Nick Punto for Italy. In addition, former Dodger skipper Joe Torre will pilot the U.S. squad. Pool play for the World Baseball Classic begins March 2 in both Taiwan and Japan, home to the two-time defending champions (2006 and 2009).

YOU SEE THIS FACE?: Dodger center fielder Matt Kemp is currently battling the Braves’ Jason Heyward in MLB Network’s #FaceofMLB contest on Twitter. The winner of the matchup moves to the final round of MLB Network’s bracket to decide who is the Face of MLB. You can view the current bracket matchups here. Fans can vote until 3:30 a.m. PT (Friday) by tweeting #MattKemp. Believe it or not, Kemp is currently trailing Heyward in the voting.

THE FIRST OPENING DAY: Opening Day at Camelback Ranch is Saturday and the Dodgers will be the home team against their cross- complex foes, the Chicago White Sox. Clayton Kershaw will start for the Dodgers and the White Sox will counter with Dylan Axelrod. Prior to the game, the Dodgers and White Sox coaches and starters will be introduced to the crowd following the pregame ceremony honoring Dodger legends.

THE DODGER BARD: The Dodgers have a new special assistant in camp this season, former big league catcher Josh Bard. Bard joins General Manager Ned Colletti’s staff as Special Assistant, Player Development and will work with Dodger Major and minor leaguers.  The switch-hitting catcher had a .254 batting average in 10 seasons in the bigs with Cleveland (2002-05), Boston (2006), San Diego (2006-08), Washington (2009) and Seattle (2010-11). In 2012, he was a catcher for Triple-A Albuquerque in the Dodger system.

COULD BE LEGENDARY: Dodger alumni Ron Cey, Tim Leary, Fernando Valenzuela, Maury Wills and Steve Yeager will help celebrate a new season of Cactus League play at Camelback Ranch - Glendale’s inaugural Legends Weekend on Saturday and Sunday. Former greats from both the Dodgers and White Sox franchises will be on hand to sign autographs and greet fans from 11:30 am-12:30 pm before being introduced in pregame ceremonies for the club’s first Cactus League game at Camelback Ranch – Glendale against the White Sox at 1:05 pm on Saturday, Feb. 23.
Posted by Roberto Baly at 4:30 PM