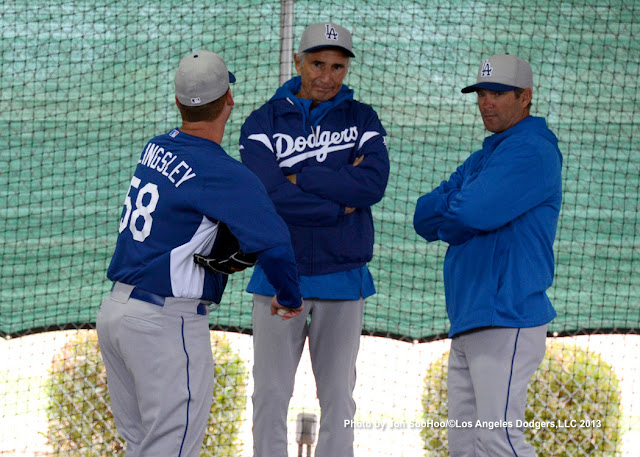 COME AGAIN ANOTHER DAY: Today, the club’s regularly-scheduled workouts on the field were cancelled due to rain. Instead, players worked out in the batting cages and in different areas inside of the Major League facility at Camelback Ranch – Glendale. After workouts concluded, the highly-anticipated ping-pong matchup between undisputed champion Clayton Kershaw and Public Relations Intern HJ Adams, who was the self-proclaimed best ping-ponger in the Dodger organization, finally began. Kershaw cruised to win in straight sets against Adams to remain the organization’s undisputed king of ping-pong.

Today, players kicked off their inaugural doubles ping-pong tournament. The tournament features eight teams in a double-elimination format. Each game is a best-of-three series and players must alternate shots.

TOUCH ‘EM ALL: Yesterday, employees from the Dodger front office, along with employees from Camelback Ranch – Glendale, played in the annual spring softball game. Team PR pulled out the victory in historic fashion, when Dodger photographer and ultra-athlete Jon SooHoo launched a walk-off three-run homer to center field with the score knotted at 15-15 in the bottom of the seventh. Assistant Director of Public Relations Joe Jareck went 4-for-6 with two doubles and too many RBI to count. In the bottom half of the seventh, after smoking a ball down the left field line, the New Jersey native tore his left hamstring on his way to first and was carted to the locker room after limping into second. After a request for comment on the severity of the injury, Head Athletic Trainer Sue Falsone directed all questions to team spokesman Joe Jareck, who declined comment. Following the game, the Dodgers placed Jareck on the 60-day disabled list and recalled prospect Jon Chapper.

ON THE DIAL: Dodger Talk debuts tonight at 7:00 pm PT (8:00 pm in Arizona) on AM 570 Fox Sports Los Angeles with David Vassegh and Kevin Kennedy. The show will air at 7:00 pm PT Monday-Saturday and will feature both Vassegh and Kennedy in addition to Jorge Jarrin.

HOME FOR YOUR DOME: In conjunction with MLB and the MLBPA, Rawlings today announced the introduction of a new, mandatory batting helmet - the Rawlings S100 Pro Comp. The mandatory implementation of Rawlings’ technologically-advanced batting helmet is outlined in the five-year collective bargaining agreement signed in November 2011 by MLB and the MLB Players Association. After extensive testing of different models in recent years and new advances in technology, Rawlings developed the S100 Pro Comp, which has passed all safety tests while maintaining the size and comfort to which MLB players are accustomed. The Rawlings S100 Pro Comp batting helmet provides increased protection for ball strikes up to 100 miles per hour.

A WHOLE NEW BLUE!: Yesterday the Dodgers officially announced details of their “A Whole New Blue” advertising and marketing campaign, which will include print, digital, television, radio and out-of-home components. The “A Whole New Blue” campaign takes its lead from the anticipation and excitement generated by team ownership’s very ambitious off-season program to strengthen the team and implement enhancements to iconic Dodger Stadium. The campaign debuted on the team’s website (www.dodgers.com) and on graphics seen at the recently held, first ever off-season team FanFest. It has been incorporated in the team’s print ads, radio spots, game tickets, and other sales collateral and will soon be displayed on billboards and bus shelters. Digital and television advertising will launch later this month. “A Whole New Blue” was designed by Walton Isaacson (WI), the team’s new advertising agency.

COULD BE LEGENDARY: Dodger alumni Ron Cey, Tim Leary, Fernando Valenzuela, Maury Wills and Steve Yeager will help celebrate a new season of Cactus League play at Camelback Ranch - Glendale’s inaugural Legends Weekend on Saturday and Sunday, Feb. 23-24. Former greats from both the Dodgers and White Sox franchises will be on hand to sign autographs and greet fans from 11:30 am-12:30 pm before being introduced in pregame ceremonies for the club’s first Cactus League game at Camelback Ranch – Glendale against the White Sox at 1:05 pm on Saturday, Feb. 23.
Posted by Roberto Baly at 4:00 PM