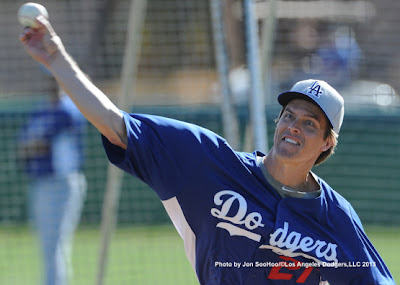 A WHOLE NEW BLUE!: Today the Dodgers officially announced details of their “A Whole New Blue” advertising and marketing campaign, which will include print, digital, television, radio and out-of-home components. The “A Whole New Blue” campaign takes its lead from the anticipation and excitement generated by team ownership’s very ambitious off-season program to strengthen the team and implement enhancements to iconic Dodger Stadium. The campaign debuted on the team’s website (www.dodgers.com) and on graphics seen at the recently held, first ever off-season team FanFest. It has been incorporated in the team’s print ads, radio spots, game tickets, and other sales collateral and will soon be displayed on billboards and bus shelters. Digital and television advertising will launch later this month. “A Whole New Blue” was designed by Walton Isaacson (WI), the team’s new advertising agency.

Today, the Dodgers’ camp had its annual visit from MLB Productions, while Showtime’s 60 Minutes Sports sat down with Don Mattingly, Ned Colletti and Tommy Lasorda for an upcoming episode on the team.

Gonzalez, who will play in his third World Baseball Classic, will serve as Team Mexico’s captain. In 2009, the 30-year-old got off to a hot start after playing in the WBC, hitting .333 with 20 RBI in 22 April games for the Padres and tying for the MLB lead with nine home runs in the month.

WRITER’S BLOCK: As a part of the team’s community efforts, Dodger players and coaches signed more than 400 jerseys, 32 bats, 120 dozen baseballs and hundreds of photos in the last two days, which will be donated to various charities throughout the Los Angeles community.

WHAT COULD HAVE BEEN: On this day in 1954, the Brooklyn Dodgers signed free agent outfielder Roberto Clemente from Puerto Rico to a one-year contract for $5,000 and a $10,000 signing bonus. At age 19, Clemente batted .257 in 87 games at Triple-A Montreal. The Dodgers tried to "hide" the prospect by not playing him full time and gambled by not protecting him in the Rule 5 Draft after the season. The ploy didn’t work as Pittsburgh President Branch Rickey drafted Clemente and he began his eventual Hall of Fame journey with the Pirates.​

Major League Baseball renamed its annual community service award after Clemente following his death on Dec. 31, 1972. A Dodger is nominated for the award each year with Steve Garvey taking home the league-wide honor in 1981 and Clayton Kershaw winning it last year.

COULD BE LEGENDARY: Dodger alumni Ron Cey, Tim Leary, Fernando Valenzuela, Maury Wills and Steve Yeager will help celebrate a new season of Cactus League play at Camelback Ranch - Glendale’s inaugural Legends Weekend on Saturday and Sunday, Feb. 23-24. Former greats from both the Dodgers and White Sox franchises will be on hand to sign autographs and greet fans from 11:30 am-12:30 pm before being introduced in pregame ceremonies for the club’s first Cactus League game at Camelback Ranch – Glendale against the White Sox at 1:05 pm on Saturday, Feb. 23.
Posted by Roberto Baly at 4:30 PM