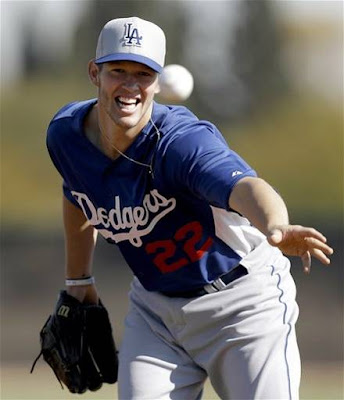 The Dodgers PR department are the best. They will be sending out these notes to the media on a daily basis. I'll be posting them here.

LACE ‘EM UP: The Dodgers opened their fifth Spring Training at Camelback Ranch – Glendale today with 29 pitchers (seven non-roster) and five catchers (three non-roster) working out for the first time. Non-roster catcher Eliezer Alfonzo is the only pitcher/catcher yet to report to camp due to family reasons.

HILLTOPPERS: Clayton Kershaw, the winner of MLB’s last two ERA titles, was among the first group of 14 Dodger hurlers to throw bullpens on the first day of workouts this morning. While Kershaw finished second in the NL Cy Young voting in 2012, he picked up one of baseball’s most prestigious honors this offseason with the Roberto Clemente Award, which recognizes a Major League Baseball player who best represents the game through positive contributions on and off the field, including sportsmanship and community involvement. Kershaw and his wife, Ellen, founded Kershaw’s Challenge, a charitable organization that encourages people to make a difference by giving back to at-risk children and communities in need. The charity has provided assistance to a variety of organizations, including to its cornerstone charity, “Arise Africa,” which helped the Kershaws build and now sustain an orphanage for children in Lusaka, Zambia called “Hope’s Home.”

BATTERY POWERED: Pitching has traditionally been a strength of the Dodger organization and last season, the club ranked third in the Majors with both a 3.34 team ERA and a .238 opponents’ batting average. In addition, Los Angeles pitchers surrendered just 122 home runs, the lowest total in the big leagues and seven less than their closest competitor, the Washington Nationals (129 homers allowed). Despite the staff’s success a year ago, the Dodgers were active in the free agent market, adding:

Zack Greinke: The 2009 American League Cy Young Award Winner and All-Star signed a six-year contract with Los Angeles. The 29-year-old, who will enter his 10th Major League season, has a 91-78 career record with a 3.77 ERA and has posted double-digit wins in five consecutive seasons.

J.P. Howell: The left-handed reliever and seven-year Major League veteran signed a one-year contract with the Dodgers after going 1-0 with a 3.04 ERA in 55 appearances with Tampa Bay last season. Since 2008, Howell, 29, ranks seventh in the American League (min. 200 games) with a .209 opponents’ batting average and has averaged more than a strikeout per inning in that span with 239 Ks in 237.0 innings.

Brandon League: After originally being acquired in a midseason trade with the Mariners, League signed a three-year free agent contract to return to Los Angeles. In 28 appearances with the Dodgers, the 29-year-old went 2-1 with six saves and a 2.30 ERA, finishing the season by tossing scoreless relief in 20 of his last 21 outings.

Hyun-Jin Ryu: The seven-time Korea Baseball Organization All-Star and five-time KBO strikeout leader signed a six-year deal with the Dodgers after being posted by the Hanwha Eagles. The 25-year-old left-hander has a 98-52 record and a 2.80 ERA in 190 career games as a professional in Korea.

MISSED THE BUS: Yesterday, ESPN’s Baseball Tonight Spring Training Bus Tour rolled through Camelback Ranch – Glendale as Matt Kemp, Clayton Kershaw and Don Mattingly were interviewed by Karl Ravech, Tim Kurkjian, Curt Schilling and Rick Sutcliffe, which have been airing on ESPN over the last 24 hours. In addition, Kemp, Kershaw and A.J. Ellis were filmed with ESPN’s 360-degree slow motion cameras for features that will air during the club’s appearances on Sunday Night Baseball this season.

GETTING SOCIAL: One of the best ways to stay connected with the Dodgers during Spring Training (#DodgersST) is on social media with Facebook, Twitter and Instagram and earlier this year, the club launched a program to reward those dedicated fans interacting with the club online, via social media and at Dodger Stadium. For more information on the Dodgers Rewards program and to sign up to be entered to win great prizes, including Opening Day tickets and autographed baseballs, fans can visit DodgersRewards.com.
Posted by Roberto Baly at 3:30 PM