I have to get this book. The story of when Tommy Lasorda took Team USA to the 2000 Olympics and defeated the Cubans to win gold medal!

I've always wondered about those rumors that Lasorda was very upset that he didn't get a gold medal. Is it true? I asked the author....

Miracle on Grass by David Fanucchi. On sale now. 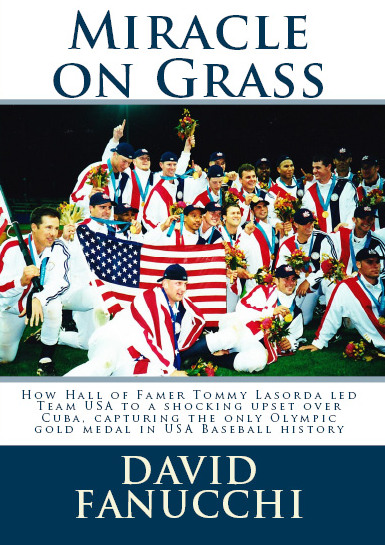 Miracle on Grass is the true story of how an unknown team of American minor leaguers stunned the international baseball powerhouse from Cuba. They were the 2000 USA Baseball Olympic Team, a ragtag group of players that had never played together as a team. Led by Hall-of-Fame manager Tommy Lasorda, who came out of retirement to lead the charge for his country, they pulled off the greatest upset in Olympic baseball history. Their triumph was remarkable, but the story of their coming together is even harder to imagine.

David Fanucchi graduated from California State University - Chico in 1993 with a degree in journalism, and was the Director of Communications for USA Baseball from 1999-2006. It was then that he worked as the official Team USA Press Officer for the 1999 USA Baseball Pan Am Team, and the 2000 USA Baseball Olympic Team.

Miracle on Grass is Fanucchi’s first-hand account of the events that took place over a two-year period, and an intimate, perceptive portrayal of the three incredible weeks Team USA spent in Australia, climaxing with their gold medal triumph over Cuba. Fanucchi gives readers a behind the scenes look at how the Major League Baseball executives in charge of this operation for the United States went about selecting the players, how Lasorda persuaded management into giving him the opportunity to coach the team, how the Americans narrowly qualified for the Olympics during a gut-wrenching game, and how capturing the gold medal in Sydney changed the lives of every player, coach and administrator involved.

Q & A with David Fanucchi -

Why did you decide to write a book about this particular USA Baseball team?

It is simply my belief that they are the greatest team that USA Baseball has ever put together, in the history of the organization, and that includes their 2006 and 2009 World Baseball Classic teams. It’s hard to argue against that, based on what the 2000 Olympic Team accomplished. Not only are they the only Olympic baseball team to win an official gold medal for the United States, but they are likely to end up being the only one forever, unless the sport gets reinstated into the Games someday. On top of all that, their story is not very well known, and I wanted to create a larger spotlight on how this group of people - not only the players, but the coaches and administrators as well - pulled off this great victory. I think a lot of people might know that the USA Baseball team won the Olympic gold medal in 2000, but not many people know how they did it, in such dramatic fashion. The entire story deserves to be told.

What were some of Tommy Lasorda’s memories when you visited with him?

He was fascinating as usual, and quoted a lot of the same material he had used back in 2000, while he was with the team. It was like he never left the mindset of being that Team USA Manager. I truly believe this was his proudest accomplishment, and he will talk about it with just as much passion, to this very day. He’s getting up there in age, but is the same man the baseball world has gotten to know and love. His brand of inspirational messaging is certainly unique.

Were you able to uncover some unknown details about this story that readers will enjoy?

Absolutely, that was my goal. It’s been over a decade now since this all took place, and I had a first-hand account of virtually everything that happened behind-the-scenes for two years. So I wanted to bring out a lot of the events that were too delicate for us reveal back then, and do the story justice. Because it is such an incredible, dramatic thing that happened to this group of men. There was a lot of struggle and many difficult decisions that were made along the way, that all helped to get the United States into that gold medal game. I hope that readers will enjoy the stories from off the field, as much as the ones that happened on the field, because in both cases, they are great. I tried to include as many of the players’ personal memories as I could. It’s really fun stuff if you are into learning about how a team gets put together from start to finish, even if you know the outcome. If you’re passionate about American pride and the Olympic spirit, this book is for you. It’s not just a sports story or a baseball story, it’s about a group of men coming together to all pull on the same rope, and an inspirational manager who leads the charge.

I've heard rumors that Lasorda was upset when he didn't receive a gold medal. He did not know that coaches do not receive medals. Is this true?

It's in the book!

Two sites where you can purchase the book. 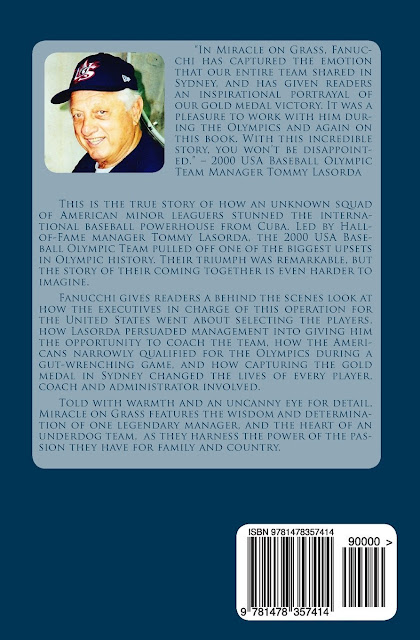