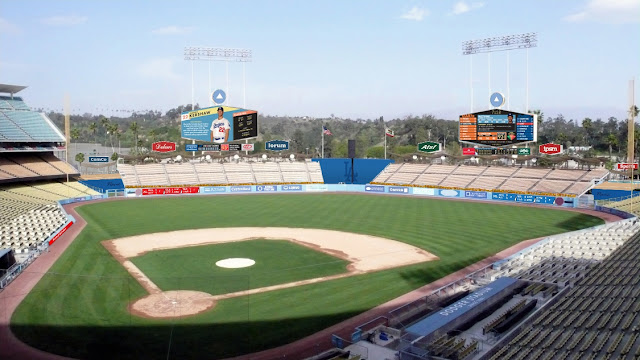 From the Dodgers and ANC Sports -

More than 30 years after Dodger Stadium unveiled one of the first full color video screens in sports in 1980, ANC Sports will debut the first 10mm 1080p surface mount light emitting diode (LED) displays in baseball at the ballpark this spring.  Featuring physical pixels which are closer together than any other large display in MLB and driven by a 1080p high-definition feed, the Dodger Stadium video screens’ will feature some of the clearest images around the League.

Spearheading the engineering, installation, integration and daily operation of the display system, ANC will deploy a high-definition video screen in both right and left field of MLB’s 3rd oldest ballpark. Both displays are designed in the historic hexagonal shape of the stadium’s original scoreboard and will feature a total active viewing area of approximately 2488 square feet.

“ANC’s technologies, integration capabilities and game day services will help to keep our fans entertained and informed, while providing them a most memorable experience at every game at Dodger Stadium,” said Lon Rosen, executive vice president and chief marketing officer of the Dodgers. “Integrating high-definition video screens into the original hexagonal scoreboard shape will not only provide some of the most impressive visuals in sports, but also retain our classic ballpark feel.”

The new hexagonal shaped displays measure 77.69 feet wide with varying degrees of height. In the center, the video screens are approximately 38 feet high while the ends of the screens measure approximately 24 feet high.

The displays will be operated by ANC’s VisionSOFT™ and enhanced scoring system designed to display large 1:1 greater than high definition resolution content.  As the first 64-bit render content system in sports, VisionSOFT and the 1080p control room infrastructure will maximize the image clarity and continuity across more than 2.3 million pixels on each screen.

“We are looking forward to working with the Los Angeles Dodgers, one of the most storied franchises in all of sports, to introduce a new enhanced game day baseball experience,” said Jerry Cifarelli, president and chief executive officer of ANC Sports. “ANC’s video displays, advanced operating system and proprietary scoring platform will provide Dodgers fans with an unprecedented visual presentation complete with the most in-depth statistical analysis available.”

The new scoreboard structures will also feature a 10mm LED strip measuring approximately 6’ high by 69’ wide beneath each video screen. Complementing the scoreboards, ANC is integrating two outfield video wall displays, each measuring approximately 6 feet high by 61 feet wide and an LED ribbon system along the club fascia that runs for 1121 feet. The entire display system will be capable of seamlessly transitioning between statistics, animated content, sponsor engagement and fan interaction.

Through a multi-year partnership with the Dodgers, ANC will continue to provide creative services, game day operation and display system maintenance after the signage is fully integrated. Additionally, ANC will provide the Dodgers with a home plate and field level rotational system, including banner printing, installation and signage operation.
Posted by Roberto Baly at 11:30 AM