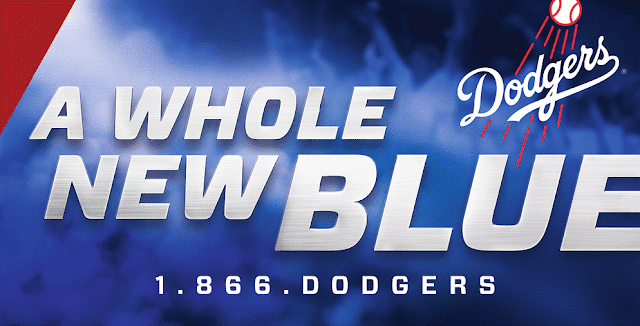 The Los Angeles Dodgers' 2013 “A Whole New Blue” advertising and marketing campaign has launched across the Los Angeles DMA and will include print, digital, television, radio and out-of-home components.

The “A Whole New Blue” campaign takes its lead from the anticipation and excitement generated by the team ownership’s very ambitious off-season program to strengthen the team and implement enhancements to iconic Dodger Stadium.

“A Whole New Blue” debuted on the team’s website (www.dodgers.com) and on graphics seen at the recently held, highly successful, first ever off-season team FanFest. It has been incorporated in the team’s print ads, radio spots, game tickets, and other sales collateral. It will soon be displayed on billboards and bus shelters. Digital and television advertising will launch later this month.

"A Whole New Blue” is more than a tagline or advertising campaign,” said Dodgers’ Executive Vice President and Chief Marketing Officer Lon Rosen. “It's a whole new way of thinking about Dodger baseball. It’s about a new attitude embraced by the team that will be reflected in the fan experience at Dodger Stadium this season.”

“We’re thrilled to be involved in the overall creation and execution of this statement campaign,” said Aaron Walton, co-founder of WI. “The Dodgers have assumed an aggressive, leadership position in Major League Baseball, sending a clear signal that they’re willing to take every step possible to dramatically improve the team and heighten the adrenaline level at Dodger Stadium. We’re confident that “A Whole New Blue” will be the rallying cry for fans from Opening Day in April to a championship in October.”
Posted by Roberto Baly at 3:30 PM