My favorite player growing up.

Mike Piazza's official autobiography is out next month. It's written by Lonnie Wheeler. 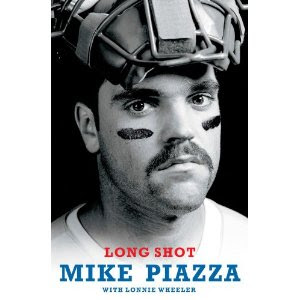 Mike Piazza was selected by the Los Angeles Dodgers in the 62nd round of the 1988 baseball draft as a “courtesy pick.” The Dodgers never expected him to play for them—or anyone else. Mike had other ideas. Overcoming his detractors, he became the National League rookie of the year in 1993, broke the record for season batting average by a catcher, holds the record for career home runs at his position, and was selected as an All Star twelve times.

Mike was groomed for baseball success by his ambitious, self-made father in Pennsylvania, a classic father-son American-dream story. With the Dodgers, Piazza established himself as baseball’s premier offensive catcher; but the team never seemed willing to recognize him as the franchise player he was. He joined the Mets and led them to the memorable 2000 World Series with their cross-town rivals, the Yankees. Mike tells the story behind his dramatic confrontation with Roger Clemens in that series. He addresses the steroid controversy that hovered around him and Major League Baseball during his time and provides valuable perspective on the subject. Mike also addresses the rumors of being gay and describes the thrill of his game-winning home run on September 21, 2001, the first baseball game played in New York after the 9/11 tragedy. Along the way, he tells terrific stories about teammates and rivals that baseball fans will devour.

Long Shot is written with insight, candor, humor, and charm. It’s surprising and inspiring, one of the great sports autobiographies.

Should be a good read for all Dodger fans. I hope one he can burry the hatchet with the Dodgers organization. He left on bad terms. Hope Mike understands that was FOX's move. That trade along with the P Martinez for DeShields deal were among the worst in Dodger history.

The price tag and book only limitation will keep this signing from being over run with chusma like fan fest was, or how most free signings usually are. Still expect a ton of people to show up, Piazza never signs here.