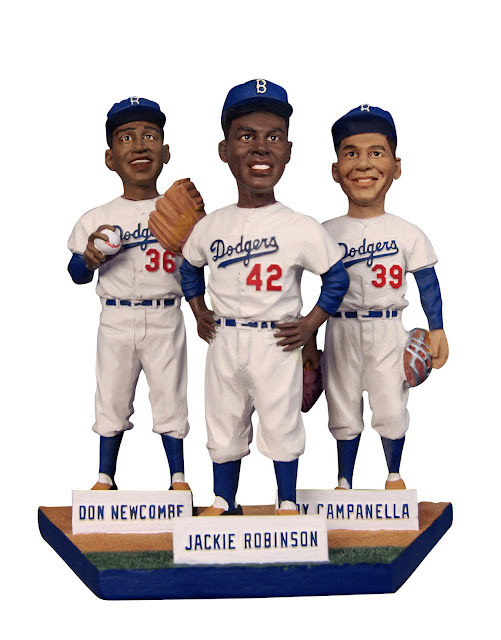 In celebration of Jackie Robinson’s 94th Birthday, the Dodgers have unveiled a Jackie Robinson, Don Newcombe and Roy Campanella Statue. The statue, which features Robinson and his teammates, Dodger legends Newcombe and Campanella, will be given away on Monday, April 15, 2013 at 7:10 pm vs. San Diego, the 66-year anniversary of Robinson breaking MLB’s color barrier. The giveaway item will be distributed to the first 40,000 fans with a ticket.

Fans can purchase tickets to this game on dodgers.com/tickets or by calling 866-DODGERS.
Posted by Roberto Baly at 2:15 PM

Looks great, I can't wait to get this one.

While on the topic of giveaways, the Dodgers made a change to their giveaway policy. No longer will you see people walk out with large boxes full of giveaway items. According to the new Dodgers promotional giveaway guidelines; "Only one giveaway item per person will be given to the bearer of the ticket upon entering the stadium."

Smart move on the Dodgers. Now Dads are going to drag their kids to every Dodgers promo game, and in turn those kids will become Dodgers fans.

The policy reads the same to me. One item per person per ticket. Therefore, three tickets, three items, regardless of how many bodies enter the stadium. If the Dodgers were to deny the item, they run the risk of being sued. Besides, fans can just get the promo, leave and return with another ticket. In any case, I am certain the Dodgers are aware that they would lose a substantial amount of money if they are altering the policy, as they will sell far less tickets, especially for the less popular promo games.

I used the internet archive wayback machine to see what the policy said last season. Here's what the old policy said; "Only one giveaway item per valid ticket will be given to the bearer of the ticket upon entering the stadium."

Now I'm no lawyer, but I'm pretty sure the Dodgers are not obligated to give you anything but a ballgame. Dodgers Stadium is the only place I have ever been to where they give you a item for every ticket you have. Every other ballpark, stadium, or arena I have ever been to has a strict one per person policy. I'm also sure the Dodgers realized the people getting these items in bulk are not getting the tickets through them, but through a third party who can sell tickets in bulk below face value.

Have you ever seen when the Dodgers run out of a popular promo item? I think that creates far more problems than a handful of fans not getting 30 Koufax bobbleheads that they paid 2 bucks a ticket on stubhub to get. Now will people still be able to get extra promo items? Of course, the gates are too big and there are way too many people there for the Dodgers to strictly enforce the one per person policy. Who honestly though is going to go in and out more than 4 or 5 times?

With the price of promo items going up to at the cheapest $20, I think the Dodgers are trying to cut into the people who started making Dodgers promo days into a business the last couple of seasons. For really popular bobblehead days like Kemp, Scully, and Magic, I doubt the Dodgers will have any problems selling tickets or giving away all those bobbleheads even if it's one per person.

Yes, there will always be those who take advantage of the system. But far more often, families buy tickets for the promos games SOLELY because of their kids. The fun promos are always during the week, and because of school, homework, illness, after school activities, etc. they can't always make it. It is wonderful to be able to bring home the item and share the special promo that the kids have been looking forward to. I firmly believe that the Dodgers are committed to the fan experience, and it would be surprising and very disappointing if they changed this very fan friendly policy. Let's hope they don't!! :)

So glad for this rule change. It sickens me to see people walking back to their cars with their promos before the first pitch has been thrown. These people are not real Dodger fans. A true fan goes for the game. These people are all about themselves and not the Dodgers. I'm talking about that loser that walks out with 10+ bobbleheads and doesn't even watch the game. He just goes home to see how much eBay can give him for his Kemp bobblehead and he can't even tell you how many home runs Kemp has. Pathetic.

I totally agree. I have seen someone with a truck hauling off many cases of bobbles and it doesn't seem right at all. I am speaking as a parent of a child who is a huge Dodger fan and has a learning disability. He just cannot afford to be at too many of the games and miss out on homework time. He is sad to miss the games and will be sad to miss out on the promos. But whatever is best for the majority is what they should do.

I heard about a policy change a few weeks ago. I asked the Dodgers but they didn't give me an answer. I'm assuming that it will be changed but they don't want to announce it yet. Stay tuned....

I'm sure if you call a rep and let them know your situation, maybe they'll be able to work something out with you where you can pick up the extra items for your children. I agree the owners seem dedicated to making the fans happy, but at the same time there are a lot of people who are abusing that trust between the fans and the organization. In specific there are a lot of people not willing to put in a little extra work, but expect the Dodgers to cater to their every whim, even if it's something the Dodgers don't need to give them in the first place. I believe this was displayed at the fiasco that was the recent fan fest. If people are not willing to get there early for free autographs, then those people should have no room to complain.

I have for a few years already been getting a couple of extra promo items at every giveaway, then selling the extras online. I started doing this to recoup the cost of the game, but over time I have got a little better at generating enough money to where I can buy my mini plan off the money I get from selling the extra. It's a lot work, but I feel it's worth it because I get to go to more Dodgers games than I would be normally able to afford.

When I started a few years ago, it was just me and a few of my friends who were doing this. We all put our money back into the Dodgers and we go to as many Dodgers games as we can, even non promo days. In the last couple of years though it has become very apperant to us that a lot of people have caught on that they can make some extra dough by selling their promo items. That's fine, but what irks me is there are a lot of people now who get boxes of promo items or even just a few extra promo items, and they don't even stick around for the games. They probably don't put that money back into the Dodgers either, and they don't go to any games that isn't a promo game. These are the people I have a problem with.

Sorry if it sounds like if I don't have any sympathy towards parents, but coming from someone who tried to buy a Dodgers backpack last season because I have no kids, or tried to get a autograph while parents sent their kids to cut in line for them, I have grown really weary over the last few seasons on how some Dodgers parents conduct themselves and in my eyes exploit their kids. I have also become suspect on whether or not certain people really are fans on this franchise, or they are just looking to make a quick buck.

It's a shame that a few bad apples have ruined it for the rest of us, but I feel the Dodgers needed to do something about this, and I'm glad they are making some changes. This doesn't really affect me and my friends all that much because we are dedicated fans and most of the times we get extras from non fans instead using extra Dodgers tickets, but it does have a effect on those who are not willing to go the extra mile for their team.

In the end I do feel this change hurts those who are not real fans, and it helps other fans who are not able to show up early on a weekday. Those people have kids too.