Hall of Famer Sandy Koufax to return to Dodgers in 2013!

Sandy Koufax is back! 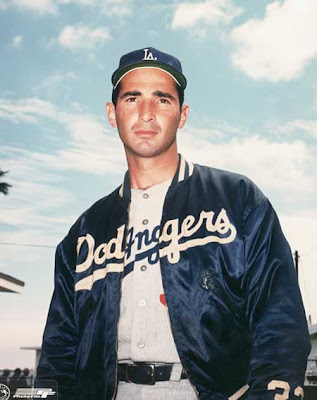 Hall of Famer Sandy Koufax will return to the Los Angeles Dodgers in 2013, it was announced.

Koufax will serve as Special Advisor to Dodgers’ Chairman Mark Walter. Koufax will attend a portion of Spring Training to work with Dodgers’ pitchers and consult with the team throughout the year.

“The Dodgers are thrilled to have Sandy back with the organization,” Dodgers’ President and CEO Stan Kasten said. “Sandy’s experience and perspective will be invaluable as we endeavor to do everything in our power to bring the city of Los Angeles a World Series champion.”

“For our young players and our veterans to be able to tap Sandy’s expertise and counsel during Spring Training and throughout the season will provide yet another tremendous resource in our efforts to strengthen our club,” said General Manager Ned Colletti.

“I’m delighted to be back with the Dodgers,” Koufax said. “I’m looking forward to spending time with the team during Spring Training and to contributing in any way I can  to help make the team a success for the fans of Los Angeles. Some of my most cherished memories came at Dodger Stadium.”

Koufax, the first major leaguer to pitch four no-hitters, including a perfect game, was the youngest player (age 36) and the first pitcher inducted into the Hall of Fame (1972) who had more strikeouts than innings pitched. In 12 major league seasons, he had a career record of 165-87, a 2.76 ERA, 2,396 strikeouts, 137 complete games and 40 shutouts.

From 1962-66, Koufax led the National League in earned run average and shutouts. He was the first pitcher to average fewer than seven hits allowed per nine innings pitched in his career (6.79) and to strike out more than nine batters (9.28) per nine innings. In his last 10 seasons, batters hit .203 against him with a .271 on-base percentage and a .315 slugging average.

I'll be honest, the first thought that jumped through my mind when I heard this was, "you have no idea how much crap I have for you to sign Mr. Koufax."