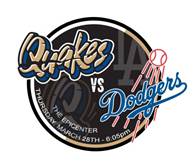 The Los Angeles Dodgers and Single-A Rancho Cucamonga Quakes announced today that the clubs will meet in a seven-inning exhibition game on Thursday, March 28 at 6:05 p.m. at The Epicenter in Rancho Cucamonga.

Los Angeles’ split-squad will be managed by Hall of Fame Manager Tommy Lasorda with the roster to be announced at a later date.

“As an organization, we are excited about strengthening our relationship with the Quakes and the Quakes’ fan base,” said Dodger Vice President, Player Development De Jon Watson.  “In this game, the fans will have an opportunity to see not only our Major League players but some of our young rising stars at the best facility in the California League.”

“This is an amazing opportunity to showcase our partnership with the Los Angeles Dodgers,” said Quakes’ Vice President – General Manager Grant Riddle.  “It will be exciting for Quakes’ fans to see the Dodgers up close and personal, and to see them right here at The Epicenter will mark a once-in-a-lifetime experience!”

Tickets for this event are currently only available to Quakes MVPs (Ticket Package Holders).  Ticket packages, which include a ticket to the Dodgers’ exhibition game, start at just $89 and can be purchased by calling (909) 481-5000 or online at www.rcquakes.com.
Posted by Roberto Baly at 11:30 AM