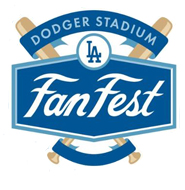 FanFest will open at 11:00 a.m. for the general public and at 10:30 a.m. for Dodger season ticket holders with their MVP cards.

11:00am  FanFest gates open for all Dodger fans

I went to fanfest and although I walk away with 6 signatures, including Tommy's, it was an utter and total mess. Very disorganized, very uncontrollable, no one in charge knew anything and they tried to fit 50lb. of dirt into a 10lb bag.