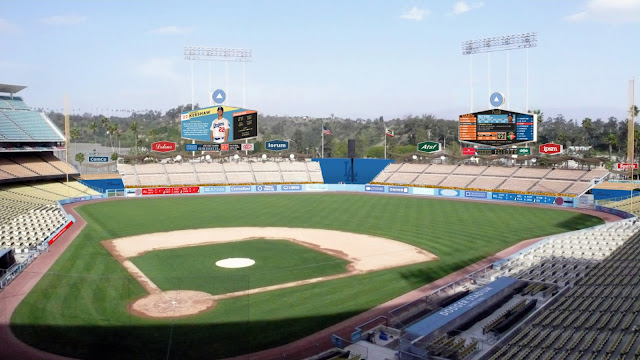 The Los Angeles Dodgers today announced their plan for improvements to 51-year-old Dodger Stadium for the 2013 season. Upgrades include:

New High Definition video boards in left field and right field.  Existing message boards, including ribbon boards at the Loge level and outfield wall, will be replaced with the new technology as well.  The unique hexagon shape of both scoreboards will be restored.

Food service enhancements to loge, reserve and upper reserve levels including new stands, cooking facilities and menus.  Details will be announced prior to the start of the season.

“The mission of Dodger ownership is to create ways to enhance the experience for all of our fans,” Dodger President and CEO Stan Kasten said. “Dodger Stadium is a treasured piece of the Los Angeles community and we will respect that heritage while restoring and enhancing the venue for our fans in the 21st century. When the improvements are completed, the stadium will retain its classic look, but it will have a more comfortable feel.

“This is a most ambitious program for a single off-season. We are grateful to Dodger fans for their input into the improvements that will be most meaningful to their game experience.”

“Dodger Stadium is a jewel in the heart of Los Angeles. It's a place where Angelenos from all walks of life have come together for decades,” said Mayor Antonio Villaraigosa. “I'm very pleased to see that the team's owners are investing in exciting and needed upgrades that will help attract new fans and refresh this civic icon.”

“From the outset the new ownership of our Los Angeles Dodgers committed to putting fans first and to being good neighbors,” said Councilmember Ed P. Reyes. “As a fan I appreciate everything they are doing to enhance the Dodger Stadium experience, and as councilmember I appreciate that they have taken the surrounding neighborhood into account particularly with regards to their echo-reducing sound system.”

The planned improvements are being overseen by Janet Marie Smith, Senior VP of Planning and Development, who is known throughout the sports world for her work with the Baltimore Orioles (Oriole Park at Camden Yards), Boston Red Sox (Fenway Park) and Atlanta Braves (Turner Field).   Smith’s accomplishments are recognized in Baseball’s Hall of Fame in Cooperstown, NY.

Following is more detail regarding the improvements to be in place for the 2013 season at Dodger Stadium.

The ability of fans and media covering games at Dodger Stadium to communicate will improve as a result of the new Wi-Fi and cellular antenna system that is being installed as part of a partnership with Major League Baseball Advanced Media.

The new sound system will provide for a much more enjoyable audio experience for fans as they listen to live and recorded music and announcements before, during and after games at the stadium. Sound will be directed to each seating section, minimizing echoes and migrating sounds outside the park.

The new video screens will be the first 10mm 1080p light emitting diode (LED) displays in MLB.  While the new scoreboard structures will be 22% larger, the active viewing area of both video boards will be 66% larger than before, thus providing the capability for a greater amount of video content and statistical information than ever before.  Driven by a new high-definition broadcast quality control room, the scoreboards will feature the latest outdoor display technologies which will offer some of the most impressive visuals in all of sports.  The original distinctive hexagonal shape which presently only exists in right field will be restored to both boards.

Two to four rows of seats will be removed from the back of the Field, Loge, Reserve and Upper Reserve levels to provide greater walking space on each concourse, as well as more wheelchair locations and “drink rails” for fans who may wish to leave their seats during games and explore the stadium.

Restrooms will be expanded, renovated and ADA compliant on the Loge, Reserve and Upper Reserve levels and in the Pavilions.   There will be an average increase in fixtures of 62 per cent for women and 32 per cent for men.  Family or Unisex restrooms will be created for each level at the stadium.  Restrooms in the outfield will be relocated under the Pavilions which will be more convenient for fans.

The Dodgers also will increase the number of positions for wheelchair patrons.  Each position will have a companion seat and will also be positioned so these patrons can see the game, even if someone stands up in front of them.

One of the “most fun things” among the enhancements, according to Smith, is the bullpen overlooks that will enable fans to socialize while watching the game from a location above the bullpens where there will be dramatic field views. Each entrance, including the center-field entrances, is being given careful attention to create better circulation and enhanced concession and retail spaces.

Playground and interactive areas for children also will be created at both the Pavilion and Reserve levels that will include life-size bobbleheads, oversized World Series rings and retired number displays.

The players will appreciate the renovation doubling the size of the footprint of the existing clubhouses, enhance their training room and home batting cage and add a batting cage for visiting teams so they won’t have to share the Dodgers’ batting cage.

The Dodgers will display many of the team’s historical items for the first time.  Fans will be able to enjoy Dodger memorabilia and artifacts such as MVP awards, Cy Young awards and Gold Gloves awarded to Dodgers.

A new retail store will be built at the Top of the Park location behind home plate. This will be open daily on a regular basis along with the Top of the Park ticket office. Tours of Dodger Stadium will be conducted daily from this location.
Posted by Roberto Baly at 12:06 PM

I was excited for the season to start but now i'm really excited to see how the stadium will look!!! Can't wait to step foot on to our little blue heaven on earth!!! is it opening day yet? :D

Magic and company ain't playing around!! They are making the stadium more fan, family oriented than it already was. Thank you. I can't wait to see the new changes to our home away from home.