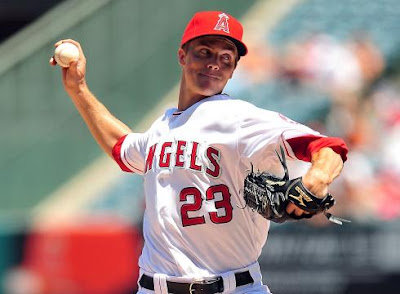 The Los Angeles Dodgers today announced the signing of right-handed pitcher Zack Greinke to a six-year contract. The announcement was made by Dodger General Manager Ned Colletti.

“As we set out this offseason to add a front line pitcher who is capable and proven, Zack was the one we zeroed in on,” said Colletti. “We are very pleased to add a second pitcher who has won a Cy Young award to this rotation and organization. We believe he brings a lot to this team and to a pitching staff that was already very good.”

In 2011, his only full season in the National League, Greinke tied a career high with 16 wins and his .738 winning percentage (31-11) in 62 starts during the last two seasons ranks third in the Majors, trailing only Justin Verlander (.759) and Jered Weaver (.745).  Greinke is one of just 13 Major League pitchers to reach 400 strikeouts (401) since the start of the 2011 campaign and has averaged 9.40 strikeouts per 9.0 innings in that span, the sixth-best mark in the Majors.

In 2009 with the Royals, Greinke won the American League Cy Young Award by a wide margin after going 16-8 with a Major League-best 2.16 ERA. That season, he was named to the AL All-Star team and ranked among the big league leaders in quality starts (26, T-2nd), complete games (6, T-2nd), shutouts (3, 2nd) and strikeouts (242, 3rd). All of those numbers represent career bests.

In the field, Greinke has not committed an error since July 16, 2010, a span of 76 games, and posted a .984 career fielding percentage, which is the eighth-best mark among pitchers since 2004.

Greinke is a native of Orlando, FL, and he was selected in the first round (sixth overall) of the 2002 First-Year Player Draft by Kansas City out of Apopka (FL) High School. He was named the Gatorade National Baseball Player of the Year following his senior season, when he went 9-2 with a 0.55 ERA (4 ER/65.0 IP) and 118 strikeouts.

Greinke and his wife, Emily, make their home in Orlando, FL.
Posted by Roberto Baly at 5:34 PM