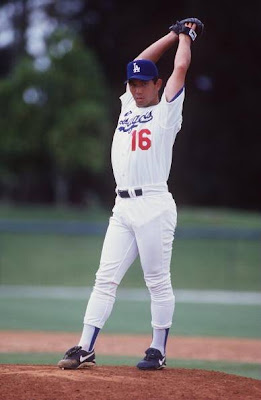 The Dodgers have added a Hideo Nomo bobblehead to the 2013 promotional calendar. This will be the eighth bobblehead in next season’s series and is set for August 10 (vs. Rays). The first 50,000 fans on August 10 will receive a Nomo bobblehead. Nomo is scheduled to attend his bobblehead night and participate in a pre-game ceremonies at Dodger Stadium. This is the second Dodger Stadium bobblehead for Nomo (Aug. 24, 2002).

Nomo broke into the Majors in 1995 and had one of the best seasons for a pitcher in Dodger history, setting the single season franchise record for strikeouts per nine innings with 11.1 while ranking among the National League leaders in several pitching categories. That same season, the Japanese-born pitcher won the NL Rookie of the Year award, placed fourth in the NL Cy Young Award voting and was named to the NL All-Star Team. In seven seasons with the Dodgers, the right-hander posted an 81-66 record with a 3.74 ERA and threw the 10th no-hitter in Los Angeles Dodger franchise history on Sept. 17, 1996, the last no-hitter thrown by a Dodger and first of his two career no-hitters. Nomo played in 12 Major League seasons combined with Los Angeles, Kansas City, Tampa Bay, New York (NL), Boston, Detroit and Milwaukee.

Bobbleheads of Dodgers past and present are scheduled throughout the 2013 season. The collection includes “I See You” Hanley Ramirez on April 30 (vs. COL), Matt Kemp on May 14 (vs. WAS), Jaime Jarrín on May 25 (vs. STL), Sandy Koufax on June 27 (vs. PHI), Adrian Gonzalez on July 11 (vs. COL), Vin Scully on July 25 (vs. CIN), a “flag saving” Rick Monday on August 27 (vs. CHI) and Magic Johnson on September 12 (vs. SF). The remaining bobblehead will be announced later.

Dodger mini plans include a 10-game bobblehead mini plan, a best seller in 2012, with which fans can purchase all 10 bobblehead promotional dates. Mini plan pricing starts at $11 and details are available at www.dodgers.com/miniplans. Season ticket options, one of the best values in Los Angeles and all of sports, start as low as $5 per ticket. Complete details on 2013 season ticket pricing can be found by visiting www.dodgers.com/seasontickets.
Posted by Roberto Baly at 2:08 PM