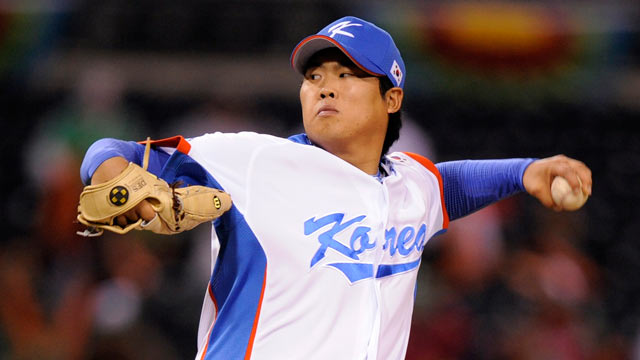 The Dodgers sent out this press release a few hours ago. I was out of the basement so couldn't post it until right now....

The Dodgers have signed signed Hyun-Jin Ryu to a six -year contract!

The Los Angeles Dodgers today announced the signing of left-handed starting pitcher Hyun-Jin Ryu to a six-year contract. The announcement was made by Dodger General Manager Ned Colletti.

“We are excited to welcome Hyun-Jin Ryu to Los Angeles and the United States, continuing the tradition of Korean pitchers with the Dodger organization,” said Colletti.  “The Dodgers continue to show the commitment to signing players from Asia and other international areas where baseball is played at the highest levels. We are looking forward to watching Ryu pitch for the franchise.”

Ryu has made 14 appearances at the international level, winning a gold medal as a member of the South Korean team at the 2008 Beijing Olympics and earning a silver medal pitching for Team Korea in the 2009 World Baseball Classic. In the Olympic competition, he went 2-0 with a 1.04 ERA and tossed a five-hit shutout in a win over Canada during pool play. In the WBC, the left-hander went 1-0 record with a 2.57 ERA (2 ER/7.0 IP) in five games (two starts), including two scoreless relief appearances at Dodger Stadium in the semifinals against Venezuela and the championship against Japan.

"Congratulations to the Dodgers and Ryu on this great signing,” said Park. “I'm excited to see him carry on the tradition of great international pitchers in Dodger blue and have Ryu represent Korean baseball in the United States."

The Dodgers have a long history with the development of Korean baseball dating to 1981, when Tommy Lasorda hosted clinics and lectures in Korea with Japanese pitcher Senichi Hoshino. The relationship continued in 1990, when the club hosted team presidents from the Korean Baseball Professional League for a baseball workshop and seminar and the club became the first Major League team to have a game broadcast in the Korean language on Sept. 9 of that year. On several occasions the Dodgers have hosted Korean baseball teams during Spring Training at Dodgertown in Vero Beach, FL, doing so with the Hanyang University team in 1995 and in 2000 with the LG Twins of the KBO following the clubs’ working agreement, signed in 1999. Most recently, Korean fans flocked to a sold out Dodger Stadium and created an electric atmosphere in support of their team during the finals of the 2009 World Baseball Classic.
Posted by Roberto Baly at 7:30 PM