It's official - Mark McGwire has been named the Dodgers hitting coach 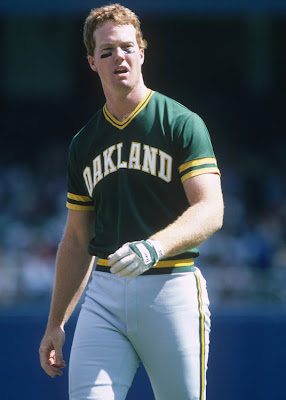 The Los Angeles Dodgers today named Mark McGwire as their hitting coach. The announcement was made by General Manager Ned Colletti.

“Mark has been able to translate his success as a big league hitter into his work as hitting coach with the Cardinals,” Colletti said. “He earned the respect of both veterans and young players while in St. Louis and the offensive numbers the Cardinals produced under his tutelage speak for themselves. We’re excited to have him join our coaching staff and anticipate great things from his work with our hitters in 2013 and beyond.”

This past season, the Cardinals, who advanced to the National League Championship Series, led the league with a .338 on-base percentage and ranked among the Senior Circuit leaders in runs (765, 2nd), hits (1526, T-1st), batting average (.271, 2nd), slugging percentage (.421, 4th) and OPS (.759, 3rd). St. Louis hitters tied for second in the NL with a .264 batting average with runners in scoring position. In the three seasons preceding McGwire’s hiring (2007-09), the Cardinals ranked eighth in the NL in runs scored.

During his time in St. Louis, McGwire worked with perennial All-Star sluggers like Carlos Beltran, Lance Berkman, Matt Holliday and Albert Pujols, while helping with the development of David Freese (2012 All-Star, 2011 NLCS and World Series MVP), Allen Craig (ranked sixth in the NL with a .307 average and led the NL with a .400 batting average with runners in scoring position in 2012) and Matt Carpenter (.294 average in 2012). In addition, Yadier Molina, a .269 hitter through the first six seasons of his Major League career from 2004-09, batted .295 with 42 home runs and 203 RBI in three years working with McGwire, including setting career-best marks with a .315 batting average, 22 homers, 76 RBI, a .373 on-base percentage and a .501 slugging percentage in 2012.

In a 16-year Major League career with the Athletics and Cardinals, McGwire hit 583 home runs (363 with Oakland), the 10th-most in baseball history. He set a Major League-record single-season record with 70 home runs in 1998 with St. Louis. In 1987, he set a single-season home run record for rookies with 49 with Oakland and was selected AL Rookie of the Year. He averaged a home run every 10.61 at bats, the best at bats per home run ratio in Major League history.

A native of Pomona, Calif., and All-American at USC, McGwire was a key member of Oakland’s 1989 World Championship team. He was a 12-time All-Star and earned a Rawlings Gold Glove Award at first base in 1990, the only one not won by Dodger manager Don Mattingly, from 1985-94. He was named to The Sporting News 100 Greatest Baseball Players list and elected to the Major League Baseball All-Century Team in 1999.

McGwire resides in Irvine, Calif., with his wife, Stephanie, and their children, triplet girls Monet, Marlo and Monroe, and brothers Max and Mason. McGwire also has a 25-year-old son, Matt, from a previous marriage.
Posted by Roberto Baly at 11:12 AM

Finally glad they made this official, as he may help the la lineup just as much as he did w/ the cardinals, and plus it leaves me many chances to try to get his autograph in the next year, love the blog by the way Roberto, it's a pleasure reading it every day.