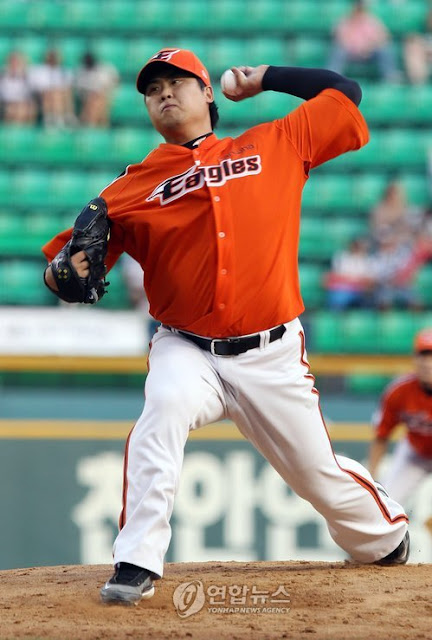 It's official! Dodgers win bid for Ryu Hyun-Jin. They have 30 days to sign Ryu to a contract.

The Dodgers' bid, reportedly for about $25.7 million, was accepted by Ryu's team, the Hanwha Eagles. The Dodgers have an exclusive 30-day window to negotiate a contract with the pitcher and his agent, Scott Boras. If no deal is reached, Ryu would return to the Eagles and could not participate in another positing process until next year.

The signing of Ryu would allow a trade, most likely of Harang or Capuano, once the team was satisfied that Lilly had recovered from shoulder surgery or Billingsley had avoided Tommy John elbow surgery after suffering a partially torn ligament.

Ryu, a seven-year veteran, was the first player to win the MVP and Rookie of the Year honors in the same season in Korea, when he went 18-6. He averaged 15 wins a season until this year, when the Eagles finished last and he had only nine wins, along with a 2.66 ERA.

The 6-1, 215-pound Ryu is a strikeout pitcher with a fastball in the low-90s with a change-up and slider.

I saw him pitch at Dodger Stadium during the World Baseball Classic and remember thinking why there aren't more Korean's playing here. I guess they don't have too since they are getting paid good money.

In his last start of the season, Ryu Hyun-jin struck out 12 against Nexen. He went 10 innings, giving up 4 hits and 1 earned run. He got the no-decision as Hanwha/Nexen could not break the 1-1 tie after 12 innings.