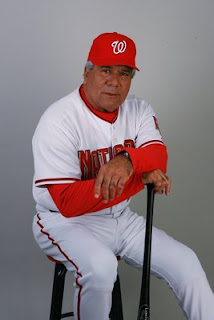 Pat Corrales, a former Major League player, manager and bench coach and a veteran of 53 years in baseball, has joined the Los Angeles Dodgers as Special Assistant to the General Manager. The announcement was made today by Dodger General Manager Ned Colletti.

“We are very happy to have Pat join us,” Colletti said.  “His vast experience, especially from his years in Atlanta and Washington, will be a great strength to our organization. He will assist us in a variety of ways, including evaluating our player development system and helping us at the Major League level.  I have known Pat for a long time and some of my early mentors, whom I respect very much, have worked side by side with him.”

After his playing career, Corrales managed for nine years in the big leagues with the Texas Rangers (1978-80), Phillies (1982-83) and the Cleveland Indians (1983-87).   He was the first major league manager of Mexican-American descent and became only the fourth manager to manage in both leagues in the same season (Philadelphia and Cleveland in 1983).

When he was hired in 1990, former Atlanta Braves’ manager Bobby Cox tabbed Corrales to be his bench coach. Corrales coached alongside Cox for nine years, a period that was part of the Braves’ reign of 14 consecutive National League East titles.  The Los Angeles native joined the Washington Nationals as a bench coach in 2007 and 2008 and returned in mid-season in the same capacity for the Nationals in 2009 and 2011 while also spending time during those years evaluating their minor league system.