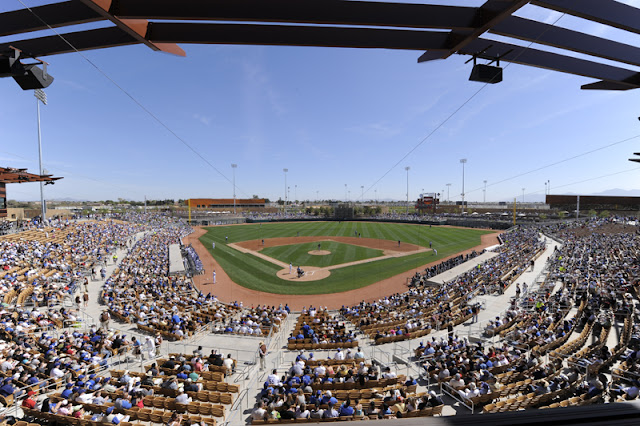 The Los Angeles Dodgers today announced their 2013 Spring Training schedule with their fifth season of Cactus League play beginning on Saturday, February 23 against the Chicago White Sox at Camelback Ranch – Glendale. Pitchers and catchers report on February 12 and the first full-squad workout is scheduled for February 16.

The Dodgers play 19 games at Camelback Ranch – Glendale, including 18 home dates. The club has at least one home game during each of the five Cactus League weekends, providing fans ample opportunity to make the five-hour drive or one-hour flight to the desert. Camelback Ranch features a state-of-the-art ballpark, six practice fields on the Dodgers side, including a replica Dodger Stadium field, walking trails, an orange grove and a two-acre lake.

The Dodgers conclude their exhibition schedule with three games against the Angels March 28-30, including a 7:10 p.m. game on March 29 at Dodger Stadium.  Season tickets, mini plans, group tickets and suites are all available now at www.dodgers.com/spring or by calling (623) 302-5000. Spring Training single-game tickets go on sale on Monday, January 7 with a full schedule of promotions available at www.camelbackranchbaseball.com.

Click here for the schedule.
Posted by Roberto Baly at 12:15 PM

Can't wait to get back to the Ranch!