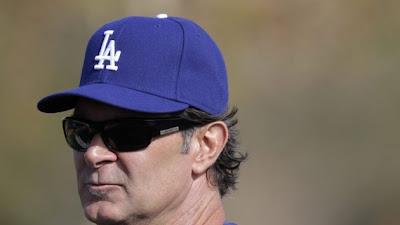 The Los Angeles Dodgers today announced their coaching staff for the 2013 season with eight coaches returning to the Dodger staff as well as three new additions. General Manager Ned Colletti made the announcement.

“All of these men have a passion for teaching and coaching,” said Colletti. “They provide a vast array of experience and are well-respected with a proven track record.”

Mattingly enters his third season as the Dodgers’ manager after leading the club to a second consecutive winning season and an 86-76 record in his second year at the helm. A former American League MVP, nine-time Rawlings Gold Glove Award winner and six-time All-Star, Mattingly is the ninth manager in Los Angeles Dodger history and 27th in franchise history.

Honeycutt enters his eighth consecutive season as the Dodgers’ pitching coach, making him the longest tenured full-time coach on the Dodgers’ staff. Since Honeycutt became the pitching coach in 2006, his staff has posted a Major League-best 3.77 ERA and rank second in the Majors in strikeouts (8544) and opponents’ batting average (.248). Last season, Los Angeles ranked second in the NL with both a 3.34 ERA and a .238 opponents’ batting average, while striking out 1,276 batters, the fourth most in the league. Under Honeycutt’s tutelage, Clayton Kershaw (2.53) led the Majors in ERA for the second consecutive season and veteran starters Chris Capuano (3.72) and Aaron Harang (3.61) posted the lowest ERA of their careers in their first year with the club.

Lopes will enter his 26th season as a Major League coach and third with the Dodgers, returning as the first base coach and baserunning instructor after playing for the team from 1972-82. A pair of Dodgers set career highs in steals last season as Shane Victorino (39 SB) and Dee Gordon (32 SB) ranked fourth and eighth, respectively, in the National League. Lopes was a part of the longest-tenured infield in Major League history along with Steve Garvey, Bill Russell and Ron Cey from 1973-81.

McGwire takes the reins as the Dodger hitting coach after three successful seasons in the same position with the Cardinals. During his time as hitting coach, St. Louis led the NL in batting average (.269), on-base percentage (.337) and batting average with runners in scoring position (.274), ranked second in runs (2,263), fourth in slugging percentage (.416) and third in OPS (.753) in the three-year span. McGwire’s tenure in St. Louis was highlighted by the Cardinals’ 2011 season, when St. Louis led the NL in batting average (.273), on-base percentage (.341), slugging percentage (.425, T-1st), OPS (.766) and runs scored (762), while striking out a National League-low 978 times en route to a World Series title. In a 16-year Major League career with the Athletics and Cardinals, McGwire hit 583 home runs (363 with Oakland), the 10th-most in baseball history.

Wallach, who played for the Dodgers from 1993-96, begins his third season as the Dodgers’ Third Base Coach. He has also spent four seasons as a minor league manager, setting a franchise record for victories (80) for the Dodgers’ Triple-A Albuquerque Isotopes in 2009 and being named the 2009 Pacific Coast League Manager of the Year. In 2011, Wallach was inducted into the College Baseball Hall of Fame.

Howell was the Dodgers’ bullpen coach from 2008-12 and in that time the club’s relievers owned a 3.49 ERA, which was the third-best in the NL. In his four seasons as bullpen coach, the Dodgers led the National League with both a .234 opponents’ batting average and 137 wins while ranking fourth on the circuit with 2,303 strikeouts. In his new role as assistant pitching coach, Howell will assist Honeycutt and Crim with their duties while also working with both the Dodger minor league affiliates and pitchers on rehab assignments. Howell pitched for seven seasons in the Major Leagues, including five with Los Angeles, and posted a 3.95 career ERA.

Valentin will enter his sixth season in the Dodger organization and first as assistant hitting coach. The 45-year-old was previously the hitting coach for Triple-A Albuquerque (2011-12) and Double-A Chattanooga (2010) and the manager for Double-A Chattanooga (2009) and Single-A Inland Empire (2008). Valentin is a veteran of 11 Major League seasons, primarily with the Boston Red Sox, winning the Silver Slugger Award at shortstop in 1995. The New York native finished his career with a .279 career batting average in 1,105 big league contests.

Mota will enter his 34th season as a coach with the Dodgers and 44th year overall in the organization.  He donned a Dodger uniform as a player in parts of 13 seasons from 1969-80 and 1982 and finished his career as the all-time leading pinch-hitter in Major League history. Mota will assist the club in Spring Training and throughout the year while also expanding his role as a Spanish language broadcaster for the Dodgers on PRIME TICKET Fox Deportes.

Yeager enters his second season as a catching instructor with the Dodgers and will work with the club’s Major League backstops in both Spring Training and throughout the season at Dodger Stadium. Yeager will also periodically visit the Dodgers’ minor league partners and work with their catchers. He played 15 seasons in the big leagues (14 with Los Angeles) and was the 1981 World Series Tri-MVP for the Dodgers along with Ron Cey and Pedro Guerrero. Known as a stellar defensive catcher, Yeager led the NL in caught-stealing percentage in both 1978 and 1982.
Posted by Roberto Baly at 10:30 AM