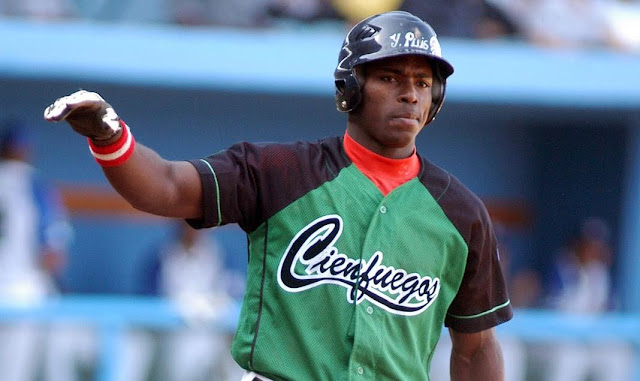 The Arizona Fall League started yesterday. Click here for a preview of the Dodgers that are participating.

Yasiel Puig will miss the Arizona Fall League because of a staph infection in his right elbow that required a surgical procedure.

Puig is expected to be fully healed in three to five weeks and will rehab at the club's Camelback Ranch-Glendale facility.

Puig, signed this summer for a $42 million bonus, developed an infection similar to one that sidelined former Dodgers infielder Casey Blake for a month in 2011. Like Blake, Puig underwent a surgical cleaning of the infected area and his throwing elbow will remain immobilized for another week.

So he misses the fall league. But is there a chance for him to play Winter ball? Last August, Enrique Rojas of ESPN Deportes reported that Puig was in negotiations to play in Puerto Rico. {linked here}

The Puerto Rican league opens November 8. That's a possibility.
Posted by Roberto Baly at 7:00 AM